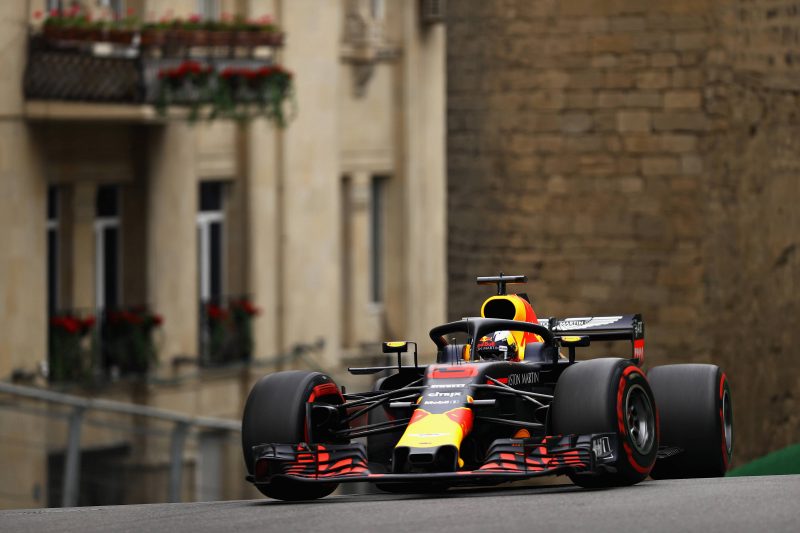 Daniel Ricciardo set the pace in Friday practice ahead of this weekend’s Azerbaijan Grand Prix as Red Bull impressed at the tricky Baku street circuit.

The winner of the Chinese Grand Prix last time out set a rapid pace in both 90 minute sessions, finishing second in the opening outing before topping Practice 2.

Ricciardo dominated the second session from start to finish, occupying the top spot for almost the duration of the hit out.

The Australian, who won in Baku last year, initially logged a 1:43.947s effort, before gradual improvements resulted in a 1:42.795s on ultrasoft tyres at the finish.

The Dutchman crashed at Turn 5 in Practice 1 resulting in damage that saw him miss the first 20 minutes of Practice 2 as his Red Bull team sought to repair the car.

He then ended the session with a suspected engine issue that saw him crawl back to the pits as the chequered flag flew.

Mercedes’ Valtteri Bottas was fourth ahead of reigning world champion Lewis Hamilton with the Silver Arrows more than half a second adrift of Ricciardo’s pace.

Hamilton did however set the fastest first sector but aborted two hot laps after mistakes.

Championship leader Sebastian Vettel could only manage 11th after his best lap during his qualifying simulation was ruined by a brake lock up.

Fernando Alonso was sixth fastest for McLaren ahead of Force India’s Esteban Ocon.

Qualifying for the Azerbaijan Grand Prix is scheduled to begin at 2300 AEST on Saturday night.