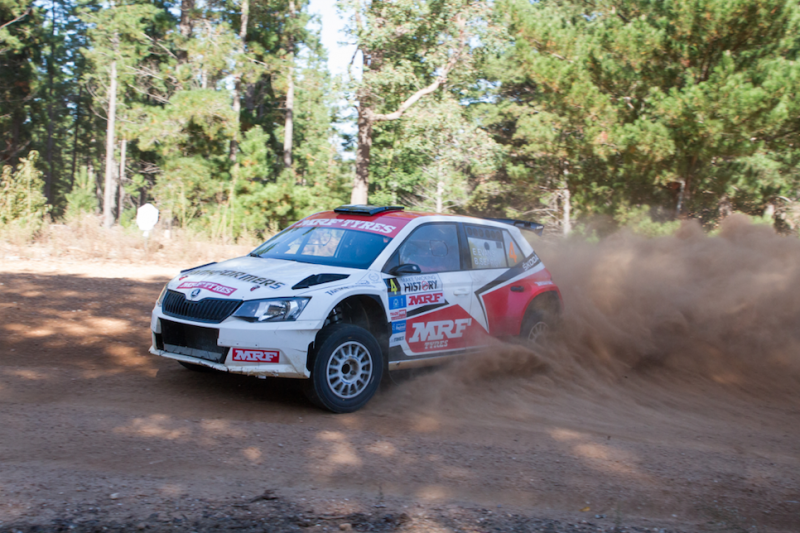 Eli Evans has dominated Saturday running to win Heat 1 of the Make Smoking History Forest Rally while Harry Bates was uninjured despite rolling his Yaris.

Evans and co-driver Ben Searcy won each of the eight Saturday stages which counted towards the opening heat of Round 2 of the CAMS Australian Rally Championship to finish just over two minutes ahead of the field.

The Tankformers-backed crew is piloting a borrowed Skoda Fabia R5, making for the car’s debut in ARC competition.

“I just wanted to stay aggressive this morning and come out of the blocks quick and it is pleasing to know that we could do that,” said Evans.

“(The Fabia R5 is) a World Rally 2 spec car; it’s one down from the World Rally Car essentially and it’s really easy to drive. You can feel the amount of effort, time and money that has been put into these cars in their design and build.

“I’ve felt a lot of pressure being in the R5 car, I think I’ve had 200 people tell me that I was going to win and it’s the fastest car by far. It’s nice to hear that but you’ve got to get in the car and you’ve got to do it.

“It was stressing me out and I said to Ben we just have to do our absolute best, keep it nice and clean and keep the nose pointing straight.”

Championship leader Bates had been fastest through the opening two stages of the West Australian ARC round in Busselton but had a soft rollover on Special Stage 6 in the Toyota Genuine Parts Toyota Yaris AP4.

Neither he nor co-driver John McCarthy were hurt but it did bring their heat to an end.

“I jumped the car into a little hole and we broke an arm but we fixed that,” explained Glenney.

“We had to nurse it through that last stage and that was quite nerve-racking. We didn’t know if we were going to lose minutes or stop all together but we got there so all good.”

The 2016 Australian Rally Champion Taylor was puzzled by her lack of pace.

“We’re scratching our heads a little bit to be honest,” she admitted.

“We had the pace in Ballarat (Round 1) but we didn’t get to put it together and here we don’t have the pace at all and it’s obviously frustrating because we feel like we are trying.”

Lewis Bates was sixth but the younger of the Bates brothers had a moment of his own, also on SS6, when he and co-driver Dale Moscatt survived a wild sixth-gear spin (See below).