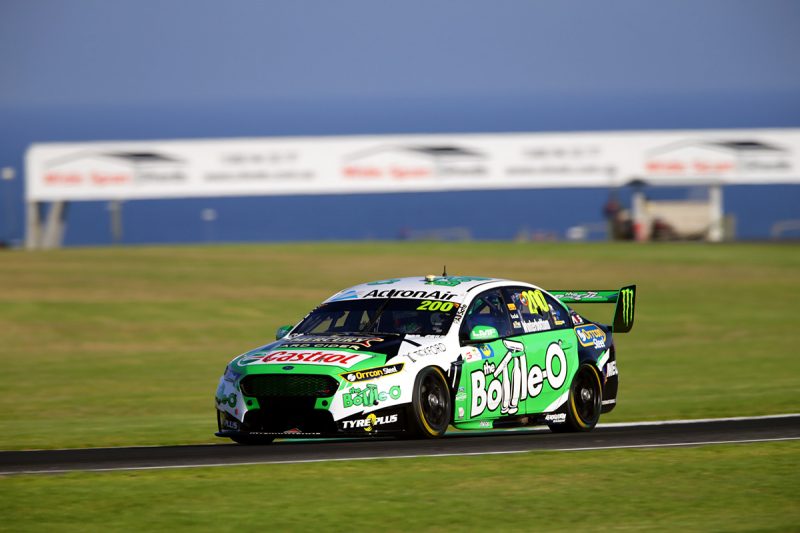 Mark Winterbottom believes that the Falcon has served Supercars well but that its time has come, amid news that it will be replaced by the Mustang next year.

Winterbottom notched up 200 championship rounds in the category’s top tier at the WD-40 Phillip Island 500, all of which have come in Ford Falcons.

The 36-year-old made his Supercars debut in the Dunlop Super2 Series in 2003, winning the title in an AU Falcon with Stone Brothers Racing.

He made his first Virgin Australia Supercars Championship start with the same outfit in the enduros that season, sharing a BA Falcon with Mark Noske.

Winterbottom went full-time in the top tier in 2004 with Larkham Motor Sport before moving to his current home, Tickford Racing in 2006.

In that time, he has also raced the BF, FG in both its Project Blueprint and Car of the Future specifications, and FGX.

“It’s been only ever Ford, so (I’ve driven) whatever brand they’ve had,” Winterbottom observed to Speedcafe.com.

“They’ve had the Falcon for the last however many years, so it’s been really good to do that.

“A lot of it’s been at this team (Tickford), so it’s really cool.

“I pride myself on loyalty and Ford gave me the opportunity to get in and it’s been great to do it in one brand of car.”

The Falcon’s history in Australian touring car racing dates back to the 1960s at Bathurst and 1970s in the championship, interrupted only by the Group A era from 1985 to 1992, while it was also the nation’s longest-running automotive nameplate.

However, Winterbottom is comfortable with its phasing out of Supercars next year, when all current Ford teams are set to switch to the Mustang, due to the continued presence of the Blue Oval.

When asked if he was sad to see the nameplate go, Winterbottom told Speedcafe.com, “Not really, to be honest; it’s served it (Supercars) really well.

“I think the (manufacturer’s) badge is more powerful than the model, so to have the Ford brand still in there is the big thing.

“Things change. It’s probably sad not to see the Falcon on the road getting manufactured, but at the same time people talk by sales and there’s a reason they’re not here any more.

“The Mustangs have sold through the roof and it was time for a change, and that’ll start the next era.”

Winterbottom believes that the Mustang’s heritage, which includes five titles in the Australian Touring Car Championship, makes it a ready-made replacement for the Falcon.

“The good thing about the Mustang is that it’s already got history.

“It’s rare that a car model can go full circle and I can’t imagine the Falcon will come back out in 30 years’ time, whereas the Mustang has got racing history (and) it’s got road car history.

“It’s a timeless model so it’s good that they’ve chosen that and that we’re racing that because it’s got history already.”

The Falcon has 12 rounds and 21 races left in the Supercars Championship, with the Perth SuperSprint next up at Barbagallo Raceway on May 4-6.