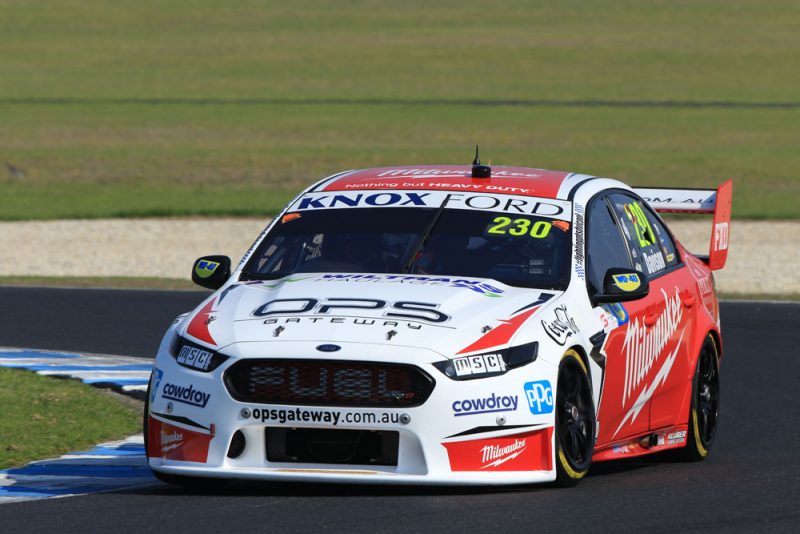 Phil Munday and Lucas Dumbrell believe their team is not far away from a top five result in the Virgin Australia Supercars Championship.

Taking over from what was Lucas Dumbrell Motorsport, 23Red Racing has made a solid start to the 2018 campaign.

Having recruited Will Davison and switched from Holden to Ford since the end of last season, the squad has recorded four top 10s in 10 starts, a record that has already exceeded Munday’s expectations.

“Podium would be brilliant, but I guess our expectation this year was to come out and be as competitive as we could – I would have been pretty happy in the mid-teens.”

“I think it’s a pretty fantastic effort because to the crew and everything it’s just a massive boost and shows that as we all get our job done and everyone performs their role we can get top 10s.

“I don’t think we’re that far away from getting a top five,” he added.

“Will’s an extremely good racer and I just think we’ll just move along and we’ll string together a weekend of two top 10s, we might have a weekend of a top 10 and a top five, and obviously like everything we move forward.”

Munday’s involvement has seen Dumbrell take a step back from team ownership, though he believes the leadership structure between Munday, himself and team manager Rob Crawford allows each to play to their strengths.

“We’re fortunate this year, it’s not a lot about Grand Poobah or Co-Poobah, it’s more about the people around just supporting each other in the role,” he reasoned.

“Fortunately we’ve got some pretty talented and experienced individuals within the team.

“It’s just about team effort. It’s not called a team sport for no reason.”

It’s a dramatic change from 2017 when the team was struggling simply to survive.

“I think 12 months ago it was very different,” Dumbrell conceded.

“It was a bit of trying to survive, we were just trying to run around with the cars and doing the best we could with what budget we had.

“Now we’re obviously fortunate to get a driver of Will’s calibre, and a car which is a race winning car and support from a racing championship winning organisation.

“The work effort and ethic I suppose of these guys has been massive. The setup and just getting everything organised, and the new car is such a different beast.

“Admittedly I’ve raced Holdens for six or seven years and I’m amazed at how different another Supercar brand is.”

Having recently obtained a Super2 Falcon from Tickford Racing, though yet to take delivery of the car, Munday is looking to consolidate this season before a renewed push in 2019.

“We’ve got a Super2 coming, so we’ll have that soon. We also have the Porsche in the Cup Challenge, so in this year I think we just want to consolidate what we’re doing and not go too far ahead of ourselves and have too many irons in the fire,” Munday said.

“We’ve done such a good job coming out of the box, the boys have all worked together, we’ve all sort of pulled together so well that I think this year is a consolidating year and getting everyone bedded in and next year we’ll out with a new car, a new Mustang, and see how we go.”