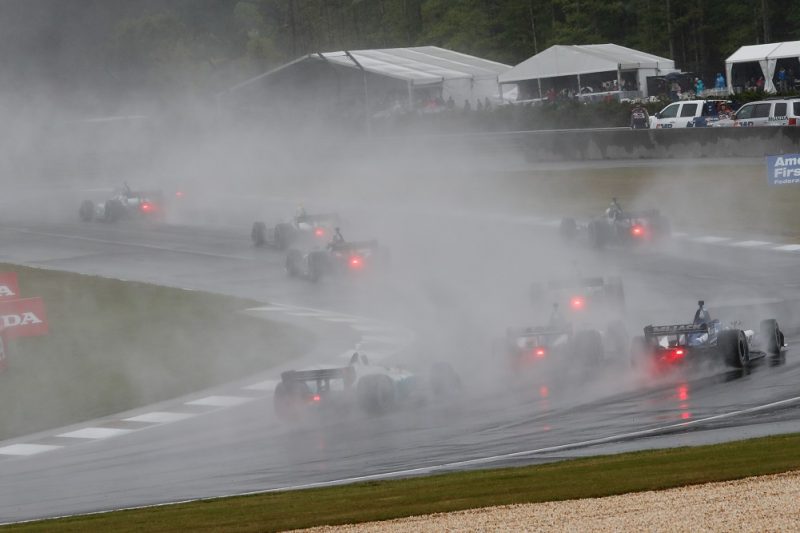 Will Power crashed out of Race 4 of the Verizon IndyCar Series at Barber Motorsports Park before proceedings were suspended until Monday due to heavy rain.

Pole-sitter Josef Newgarden (#1 Team Penske Chevrolet) will be at the head of the field having led all 22 laps before the race was red flagged a second time.

The first lap of the Honda Indy Grand Prix of Alabama was run under Safety Car due to the rain, before drivers were let loose on Lap 2.

The Safety Car was called again on Lap 12 when Charlie Kimball found the fence in the #23 Carlin Chevrolet, which he claimed was a result of a hit from Ed Jones (#10 Chip Ganassi Honda).

Power then aquaplaned his #12 Team Penske Chevrolet into the wall near Turn 1 at the restart.

“It’s just a real shame for everyone on the Verizon Chevy team,” said the Queenslander.

“The car was good and we were doing our best out there, but it was really hard to see anything in front of me. The conditions were just so bad.

“As soon as I got to the front straight (on the restart), the car just came around and I tried to keep it off the wall, but it was hydroplaning and there was nothing I could do.

“I feel bad for the team and for the fans in this weather. Just too bad. Hopefully, our luck can turn around when we get to Indianapolis.”

The next three laps ran under Caution before a first stoppage which last more than half an hour.

The field returned to the circuit only to run three more laps before proceedings were finally called to a halt for the day.

A resumption is due at 0200 AEST on Tuesday, with 68 laps still left to run and just over 75 minutes remaining before a time-certain finish.

Replay: Power aquaplanes into the wall