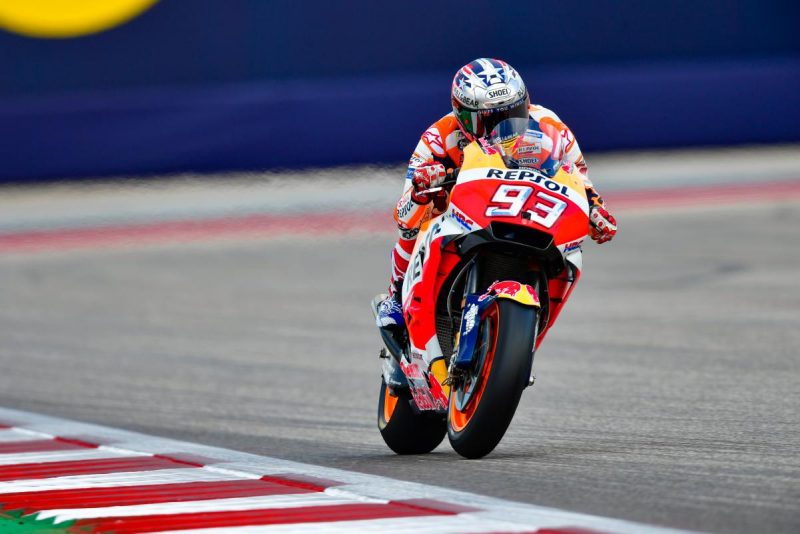 Marc Marquez is still the only man to have ever won in six MotoGP races at the Circuit of the Americas.

While he was denied a pole start due to a grid penalty, Marquez made light work of things from fourth on the grid to lead midway through the first lap and disappear into the distance.

Maverick Viñales was the best of the rest and initial leader Andrea Iannone finished on the bottom step of the podium.

Iannone got the holeshot from the middle of the front row and was first out of Turn 1 on the #29 Suzuki Ecstar entry.

Marquez also started strongly and took up second position before making his move on Iannone down at Turn 12.

The top two set about gapping the field and Iannone actually got down the inside of Marquez’s Repsol Honda at Turn 11 on Lap 3 but couldn’t make the move stick.

That was the last time anyone got close to the world champion, who was four seconds up the road by the end of Lap 7 and cruised home to the chequered flag after 20 laps.

“Today I didn’t have confidence to battle so I was pushing from the beginning and just go away, open the gap, and I did a great race,” said Marquez.

Viñales caught Iannone and used his Movistar Yamaha to execute a textbook block pass at Turn 1 on Lap 7.

Valentino Rossi was also close for a period of time but the battle for the minor placings petered out, leaving Iannone to take his first podium for Suzuki and ‘The Doctor’ in fourth.

Andrea Dovizioso eventually used the power of his factory Ducati to pass Johann Zarco for fifth on Lap 17, a move which gives the Italian the championship lead by a single point over Marquez.

Zarco (Tech3 Yamaha) finished a position further back in sixth, while Dani Pedrosa (Repsol Honda) rode through pain after a highside last time out in Argentina to claim seventh.

Miller ended up ninth having come from all the way from 18th on the grid on his Pramac Ducati.

Cal Crutchlow was fourth on Lap 1 before spending several laps battling with Zarco and Dovizioso for fifth.

He was running sixth when he dropped his LCR Honda at the final corner of the circuit on Lap 8 and while the pre-race championship leader remounted he finished outside the points in 19th.

Alex Rins had been catching seventh-placed Pedrosa when he lost the front of his factory Suzuki at Turn 12 on Lap 11 and did not take any further part in the race.

Round 4 is the Spanish MotoGP at Jerez on May 4-6.