Reynolds wouldn’t be on podium without De Pasquale

Reynolds wouldn’t be on podium without De Pasquale 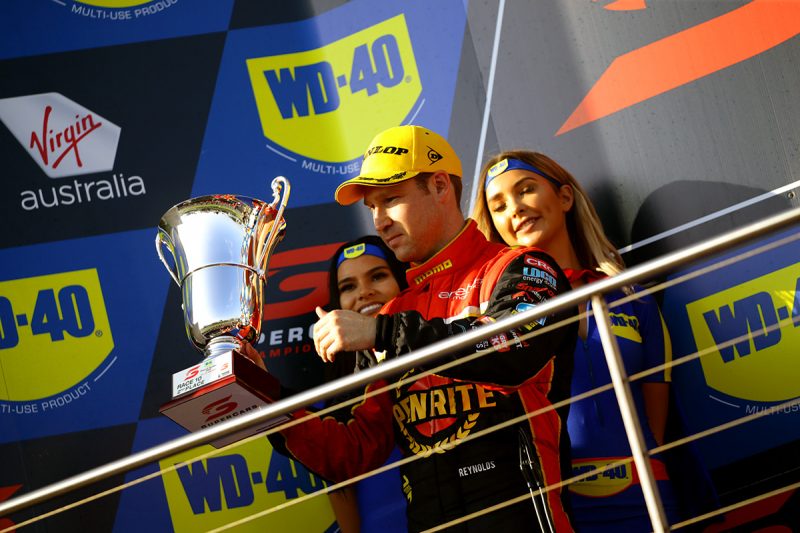 David Reynolds on the Race 10 podium

David Reynolds says that there is ‘no way’ he would have finished on the podium in Sunday’s race at Phillip Island without copying rookie team-mate Anton De Pasquale’s set-up.

Reynolds qualified on the front row and duelled with eventual winner Scott McLaughlin for the effective lead of Race 10 of the season in the laps which followed his second pit stop.

He ultimately came home second in the second race of the WD-40 Phillip Island 500, consolidating the same position in the Virgin Australia Supercars Championship.

The result represented a far more competitive performance than the day before for the #9 Erebus Penrite Commodore.

Reynolds qualified seventh-fastest for Race 9, which became sixth when Fabian Coulthard was excluded, and finished sixth after a post-race penalty for provisional runner-up Jamie Whincup.

De Pasquale started that encounter a row behind and finished half a second and one position further back.

The 22-year-old qualified eighth for Race 10 and held the same position until he had to stack in pit lane when Erebus was caught out by the early Safety Car.

He had also virtually matched Reynolds in Friday practice, when the two took different directions on set-ups.

“To be honest, Anton and Mirko (De Rosa, race engineer) and their little engineering group they have on Car 99 is probably the reason why I’m sitting here,” revealed Reynolds.

“In practice we were 11th with our sort of standard car (set-up), somehow managed a lap in qualifying to be P7, and then had no pace yesterday.

“I noticed he was very fast in yesterday’s race; probably should have outqualified me and beat me.

“(I) Stole his set-up for today, (qualified on the) front row, and finished second with a chance to win, so without his contribution to our team at Erebus, there’s no way I would have been here.”

Reynolds emerged just ahead of McLaughlin after his second pit stop in Race 10 and while the Kiwi got through at Stoner Corner, the Commodore driver fired back past at the very next opportunity.

While seemingly a contrast to his call to surrender the effective race lead without any fight in Race 2 of the season in Adelaide, Reynolds said the move was not a signal of a change in mindset.

“You just drive to what you feel and how you think your car’s performing at the time,” he explained.

“I don’t like crashing into people, I try not to do that, I don’t like making the boys work extra hard if I’ve trowelled it hitting the fence or trowelled into another car or something like that.

“I just do the best with what I’ve got, every race, regardless of if people see it as aggressive or not.”

Reynolds did cede the lead for good two laps later, understeering through Southern Loop and leaving a gap for the Shell V-Power Falcon.

The 32-year-old went on to score a third podium of the year, while De Pasquale barely recovered from pit stacking to cross the finish line in 16th.

Reynolds remains second on the ladder, 60 points behind McLaughlin and 38 ahead of Shane van Gisbergen.

De Pasquale is 18th, reclaiming the mantle of leading rookie over the course of the weekend.