Percat: ‘One of the hardest cars I’ve ever had’

Percat: ‘One of the hardest cars I’ve ever had’ 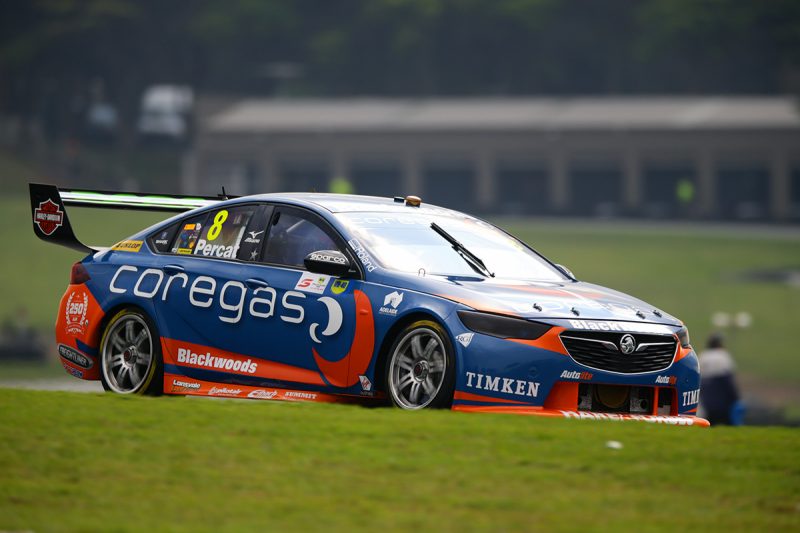 Nick Percat has labelled the Coregas ZB Commodore he drove in Race 10 at the WD-40 Phillip Island 500 the most difficult car he’s ever driven.

Front splitter issues during Saturday’s race left Percat on the back foot, before a repeat in qualifying for Sunday’s race consigned him to last on the 26-car grid.

The BJR squad remedied the situation by swapping one of Tim Slade’s splitters on to the car, and dialling out downforce in an effort to prevent another failure.

“We made some big changes to the car which took away a lot of front downforce, just to make sure the car survived and get points.

“Turned out it was still a pretty speedy race car; to pass everyone legitimately and have some good battles along the way was pretty fun.

“But (it’s) disappointing that we couldn’t capitalise on our car in our normal configuration because it was definitely top five kind of car – it was probably a top five car today, we just started last which makes it hard.”

Percat rose through the field to finish 13th, one spot behind BJR team-mate Tim Slade, but while his car may have been fast it was far from easy.

“It was probably one of the hardest cars I’ve ever had to drive,” he admitted.

“My shoulders and neck are absolutely fried, which is not normal, for our cars.

“When you take away the downforce the car moves around a lot, so there’s a lot more corrections going on, a lot more inputs on the steering and balancing that with the brake pedal.

“Generally it was just a hard car to drive rather than if you had the full downforce configuration.”

The compromised setup, which left him struggling for front grip, also forced Percat’s hand when battling other cars.

“When I caught someone I had to pass them straight away because if I follow I lose even more aero,” he said.

“That’s when the tyres were getting hurt, when you’re following people. So it was more like get to them, pass them and get clean air again.”

Much of Percat’s progress came about on the opening lap, with the Commodore driver climbed from last to 21st on the first tour.

“I get good starts, good launch and then to be honest when you’re racing against a few of those rookies and stuff they just put themselves in the wrong spot,” he explained.

“They think about the short game, being that corner they’re on, rather I’m thinking by the time we get back around to the start-finish straight to make sure I’m in the right position.

“I work my way back from the last corner and figure out where I need to be.”

With the lessons learned at Phillip Island, Brad Jones Racing will now look at resolving the splitter issues experienced by Percat more permanently.

“It’s how you mount it, what’s hanging on it, what you do to support it,” team boss Brad Jones explained of the failures experienced over the weekend.

“We’ve learnt a lot in the last couple of days and we’ve rolled out every old trick all of us know to try and get to this point today.

“But this weekend has been very interesting, I think we’ve learnt a lot more about what we need to do going forward.”