McLaughlin: Phillip Island wins ‘a bit of a relief’

McLaughlin: Phillip Island wins ‘a bit of a relief’ 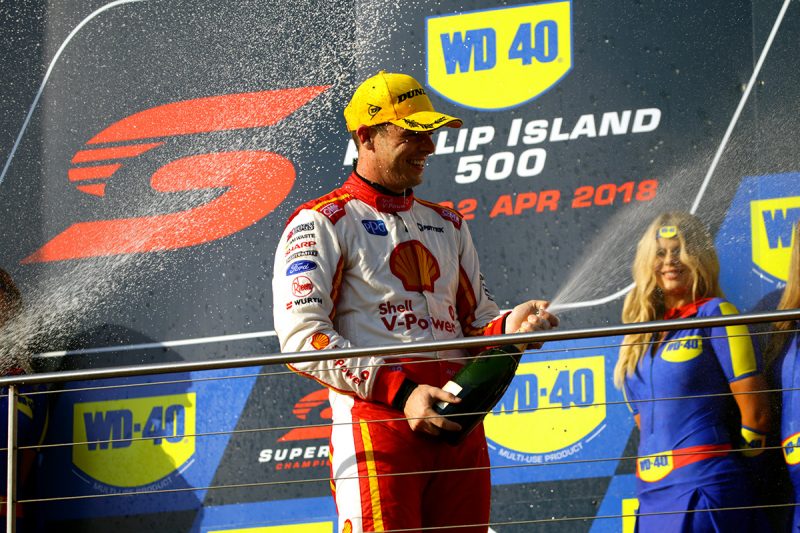 Scott McLaughlin has labelled his twin race wins at the WD-40 Phillip Island 500 as ‘a bit of a relief’ despite seemingly having the fastest car across the weekend.

McLaughlin became the second driver to sweep a race weekend this season, and like Shane van Gisbergen in Adelaide he did so from pole in each 57-lap affair.

The Shell V-Power Racing driver in fact continued a hot streak of six pole positions in a row at the Phillip Island Grand Prix Circuit, dating back to his final season in the Garry Rogers Motorsport Volvo S60 in 2016.

In the intervening race weekend at the Victorian circuit, McLaughlin finished 10th after incurring a drive-through penalty and 14th having erred on strategy.

While appearing to have a pace advantage over the rest of the field, McLaughlin was not completely satisfied with his DJR Team Penske FGX Falcon.

He was, however, more pleased with how he executed his weekend, with the 300-point haul taking the New Zealander to the top of the table.

“It’s a bit of a relief in some ways,” said McLaughlin.

“It’s nice to be able to convert a good car. We had a great car here last year and qualified well and all that sort of stuff, but we lacked strategy (and) I lacked my starts.

“Today and yesterday I had really good starts and I felt like we just converted really well.

“Obviously there with Davey at the end was a great battle, similar to yesterday.

“It was a great race, a perfect weekend for me and we’ll hopefully build from this.”

One blot on Car #17’s copybook, however, was pit stops.

On three occasions, McLaughlin had a simple opportunity to gain track position by virtue of a slightly shorter fuel fill.

Despite DJRTP now sitting at the head of pit lane, he twice missed out on jumping Jamie Whincup when they stopped together on both occasions in Race 9 and lost ground merging behind three cars in the first pit stop cycle in Race 10.

Team managing director Ryan Story admitted that the calls had made McLaughlin’s race harder than it needed to be, but was still satisfied with his outcome overall.

“It was all about risk management but you saw through our pit stop, through the pit stop phase, we basically gave away track position in those sequences,” Story told Speedcafe.com.

“Neither race was easy by any means.

“We take what we can out of it, but not every day between now and the end of the year is going to be as good as these days have been so we’ve got to take them when we get them.”

Fabian Coulthard in Car #12 finished Sunday’s race in fourth position, eight spots better than the day prior when he was buried in the field due to a qualifying exclusion which cost a front row start.

Story said that the stronger run in Race 10 was a confidence boost for Coulthard, who leaves the Island ninth in the championship.

“He had a tough weekend,” Story conceded.

“We didn’t make it easy for him and we certainly made Saturday really tough for him and that’s certainly one we’re entirely responsible for and it was certainly no fault of his own.

“But he had good pace today and was within sight, which was important.

“It was good for his confidence to bounce back from the day that he had on Saturday to be in the top five today.”