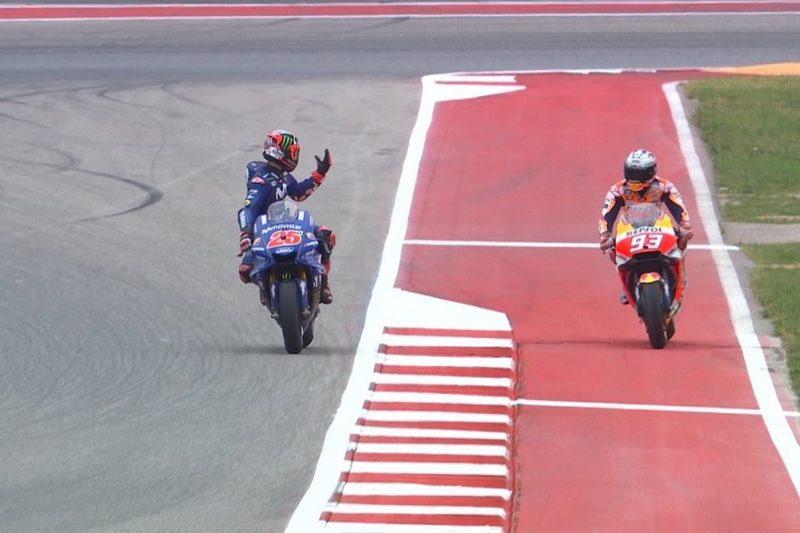 Viñales reacts to being impeded by Marquez pic: MotoGP Twitter

Marc Marquez will start the Grand Prix of The Americas from fourth position despite setting the fastest lap after being penalised for blocking Maverick Viñales.

Marquez had a dramatic qualifying session on his Repsol Honda, crashing midway through and having to ride a scooter back to pit lane to get to his second bike.

When the Spaniard began his second run, he appeared to get in Viñales’ way during his out lap as the Movistar Yamaha rider attempted a flyer.

Viñales usurped Marquez at the top of the order next time around, only for #93 to go reclaim the position with a lap 0.4s faster again.

The pole would have been Marquez’s sixth from as many MotoGP rounds held so far at Circuit of the Americas, but an investigation was announced as qualifying came to a close.

The three position grid penalty for the baulk means that Viñales will share the front row with Suzuki Ecstar’s Andrea Iannone and Tech3 Yamaha’s Johann Zarco.

Alongside Marquez will be Valentino Rossi (Movistar Yamaha) and Jorge Lorenzo (Ducati Team).

Pol Espargaro was the first of the Red Bull KTMs in 12th position after coming through Qualifying 1.

Jack Miller could only manage the eighth-fastest time in Q1, meaning he will start from 18th on his Pramac Ducati.