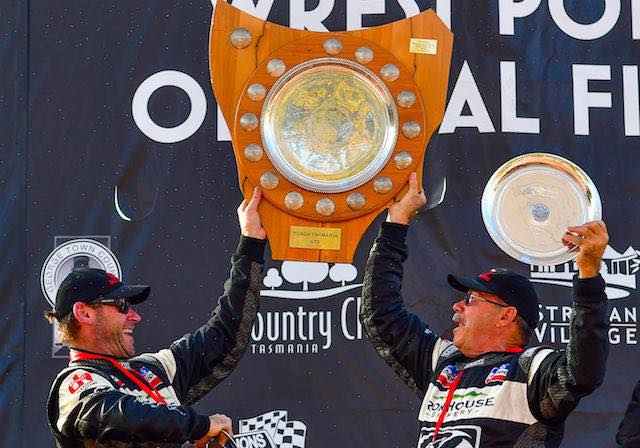 Jason and John White have secured a seventh overall victory in Targa Tasmania after their nearest rivals crashed on the final day.

The Whites cruised to a 1:05s win over Steve Glenney and Andy Sarandis, while Matt Close ran his Porsche GT3 off the road half a kilometre into the first stage of the day. 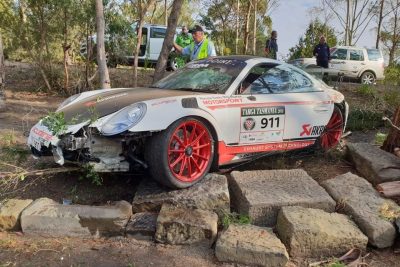 Close, who started the morning 27 seconds off the lead, admitted fault but said that he and co-driver Cameron Reeves were proud to have pushed the eventual race winners up to the final day.

“Unfortunately, on cold tyres I just asked a bit too much of them,” he explained.

“I take the blame. We are proud because we took it up to him (White) and I don’t think he’s had that sort of pressure for a long time.”

While the Whites led at the end of each of the six days in their Dodge Viper, Jason White conceded that they had been more nervous than they appeared.

“That’s by far the hardest we have had to drive,” he said.

“We were actually having a lot more sweat about what was going on with the tyres. It really forced John and I to be at the top of our game.

“But it wasn’t so good to see Matt go off.

“We’ve had to manage a few issues with the chassis as well as the tyres ourselves through the week. One of the things about this event is managing your head and not panicking.

“A lot of the stages where we took big chunks of time out we were really out of our comfort zone. It was really nice to up the ante and discover a new level.”

Glenney’ and Sarandis’ runner-up finish in their Subaru WRX STI saw them also take out the GT4 class, while Michael Pritchard and Gary Mourant (Porsche 911 GT3) completed the outright podium.