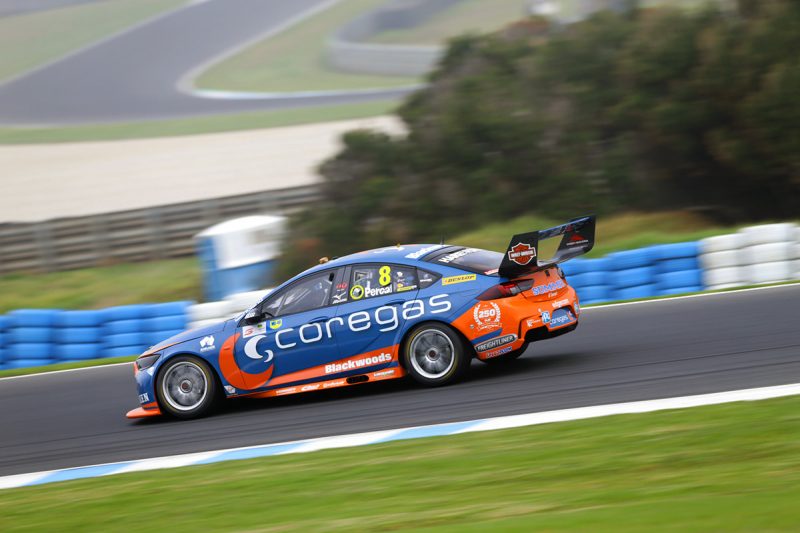 Percat ran around the back end of the top 10 for just over half the 57-lap opener at the WD-40 Phillip Island 500 before pitting for a splitter change at the end of Lap 32.

The #8 Coregas Racing Commodore went out for another nine laps before pitting again for a second new splitter, eventually making the finish 12 laps down in 26th and last position.

It was a bittersweet outcome for Percat and Brad Jones Racing, given that the 29-year-old managed to run competitively despite being hampered by the problem from Lap 2 onwards.

“Basically from the first flyer, off the start into the Honda Hairpin it broke and shook like crazy,” recalled Percat.

“I got through the first stint and it was getting worse and worse, then that splitter actually completely fell apart, which I expected.

“Then the next one went on, but I think it would have broken the front rails or something like that so as soon as we put the next one on it’s just on the ground again, then destroyed that one.

“The thing had really good speed and that’s positive.

“I never got to actually push the car at all because the splitter was broken so to be even running inside the top 10 was pretty amazing.

“Hopefully we can fix the front bar issues, give the set-up a tune-up and go again tomorrow.”

Team boss Brad Jones was unsure of the root cause of the problem, which did not affect the sister Commodores of Tim Slade or Tim Blanchard, but also lamented a missed opportunity for another strong result.

“It was flapping but it (mountings) didn’t quite fail, but we were worried it would and we didn’t want the thing to fire off into the fence,” Jones told Speedcafe.com.

“We felt discretion was the better part of valour and came in and changed it, and unfortunately took Nick from a top 10 position and made him last.

“(It’s) really disappointing but (we’ll) have a good look at it tonight, assess what happened, and see what we think caused it, and hopefully come out tomorrow with all guns blazing.”

Percat, meanwhile, was also thrilled with his early race battle with Will Davison.

The South Australian native started well and pulled up alongside the 23Red Racing Falcon to run together for nearly a whole lap including the Hayshed, before Percat took over 10th position.

“The start was really good, (I) obviously made up a few positions and had an epic battle with Will.

“(It was) probably one of the best battles I’ve had in a Supercar; it shows good respect.

“To go side-by-side at Phillip Island from Turn 4 all the way back to Turn 1, (including) the fastest corners in the country, is awesome.

“I actually got on the radio and was like, ‘That was epic’.

“Thanks to Will for not having me off; we just gave each other room.”

Slade too was involved in a willing early stoush, with Garth Tander and the Walkinshaw Andretti United pair of Scott Pye and James Courtney, on his way to an 11th position finish.

Blanchard ended up 21st, two positions better than he qualified.