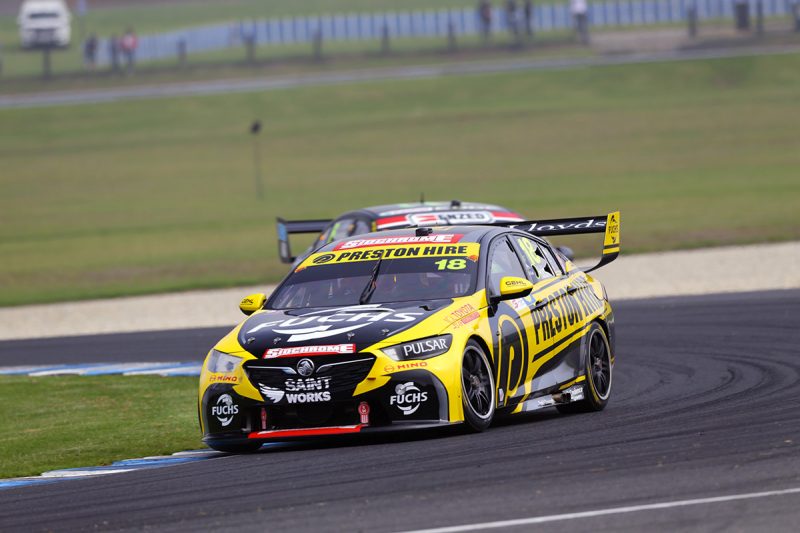 Preston Hire Racing will use a borrowed front splitter in Saturday’s race after suffering a number of failures during Friday practice for this weekend’s WD-40 Phillip Island 500.

Lee Holdsworth suffered three failures on Friday, exhausting the team’s supply and forcing it to borrow another from an ‘alternate’ supplier.

Preston Hire Racing was not alone in seeing issues, Walkinshaw Andretti United is understood to have seen vibrations, though was the only team to have suffered failures.

“Both the first and second practice session we had issues with the front splitters,” Preston Hire Racing’s Jeff Grech told Speedcafe.com.

All southern-based teams have splitters supplied by Garry Rogers Motorsport, which operates under licence from Triple Eight.

Holden teams strengthened their splitters after pre-season testing revealed a weakness in the design, which saw the front bill vibrate before eventually breaking off the mounts.

Preston Hire Racing’s splitters had all been strengthened to a greater or lesser degree, but all failed on Friday.

“Our first splitter had some minor strengthening done,” said Grech.

“The second one that we got from GRM, they changed it slightly from what they’d learned, and we only got one last week and that was so called the latest and greatest, and that failed as well.

“We’re obviously clearly frustrated, but what do you do?

“They had the same issue; the support brackets from the front fascia down onto the bottom floor delaminating.”

The failures are caused by the aerodynamic load placed on the splitter, rather than damage sustained running over kerbs or contact with the racing surface.

“You always run the car low where you’re trying to get the bottom aerofoil of the front splitter to give you the downforce, but certainly we’re not running it silly low where rubbing on the ground or over a kerb, actually hitting the bottom of the spoiler,” Grech explained.

“It’s purely an aero load that’s separating – there’s some support brackets, and we don’t make them, we obviously buy them from the source, and they’re delaminating, basically

“What happens? You then get the floor that’s not supported, it flaps and then the driver  just feels the whole front shaking and we lose from downforce.”

Preston Hire Racing’s splitters are produced by Garry Rogers Motorsport, and differ slightly in their construction from those produced by Triple Eight, which supplies the Queensland-based teams.

“I don’t think the Walkinshaw ones failed, there was certainly some fluttering in the bottom beak or the undertray,” Barry Rogers told Speedcafe.com.

According to Rogers, the issue surrounds finding the balance between flexibility needed to bounce over kerbs at street circuits, and the rigidity needed at high speed venues such as Phillip Island.

“The longer beak on this ZB splitter, the beak on the splitter is longer than what has been traditional, has definitely had some impact on that manufacturing process the way we’ve done it.

“A full carbon front fascia is as rigid as you can get, and I believe that’s what Triple Eight run.

“We run a kevlar/carbon type mix in our fascia to give it some flexibility, but maybe we need to reassess what happens there.”

Heading into the weekend, Rogers said the teams supplied by GRM were given the opportunity to have their splitters strengthened.

“We offered all the teams to bring their splitters to us prior to this round and put some additional bracing in them, knowing that there could be an impact here.

“I’d have to check, but I don’t believe Team 18 brought theirs to us, they wanted to do their own thing.”

Preston Hire Racing sent two of its splitters to Melbourne overnight for strengthening, with the third given to GRM.

“It’s a cruel sport. All we can do is reset a little bit for the race and hopefully get some places,” said Grech.

“The main aim is to get through Race 1 (of the weekend) with no splitter issues and hopefully juggle the strategy and get up some places, and I think we’ll have had a good day.”

Lee Holdsworth will start 21st for Race 9 of the Virgin Australia Supercars Championship, which starts at 1545 local time/AEST.