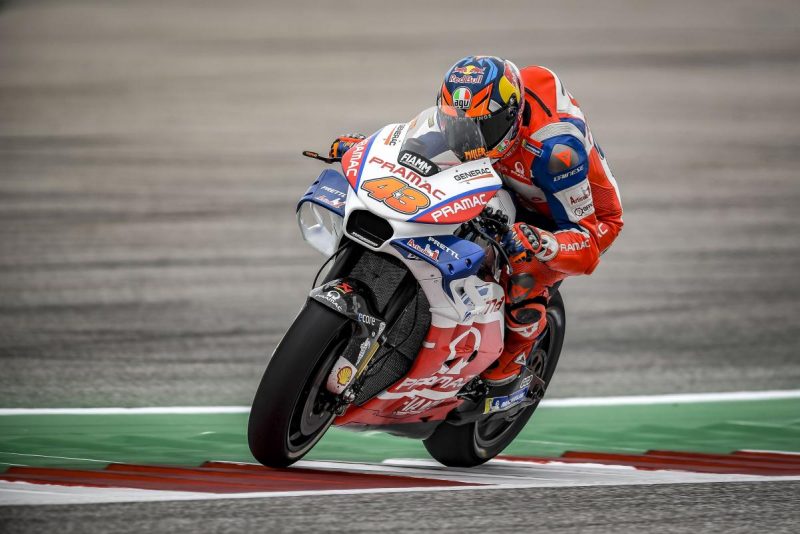 Jack Miller’s Pramac Ducati’s windscreen was broken by rocks he likened to bullets during Friday practice for this weekend’s MotoGP race in the United States.

The Circuit of the Americas which hosts the race underwent grinding work last month in a bid to reduce the bumps caused by Formula 1 cars which had become an increasing issue for motorcycle riders.

However, the track was left in a dirty state for this weekend’s race meeting, leading to issues with debris and visibility.

“I don’t want to be negative but it’s definitely worse than it was last year,” said Miller.

“The track I thought was fine last year, but this year she’s turned into a bit of a motocross track, especially with the rooster (tails of dust) down the back straight.

“We’ve broken a windscreen already with the rocks and the dust.

“I’m going put some drops in my eye now because I hate dust, and it’s so bad down that back straight; it’s ridiculous.

“Honestly, I couldn’t believe it. I was in the Clinica (Mobile) when Moto3 was on, and everyone was like ‘did you see the dust on the back straight?’ and I thought ‘how bad can it be? It can’t be worse than Qatar.’

“But I came out of there on the first lap behind Dovi and I actually buttoned off (the throttle) because it was getting roostered, and it was like big old rocks hitting me at 300km/h… They felt like bullets. I wasn’t too keen on that.

“It’s a real shame, because I really enjoy this track, but to get a rhythm today was really hard.”

Miller also expressed concern about forecasts for rain on Saturday, with predictions of storms during Free Practice 3.

“I’m actually wondering how it’s going to be to ride on that shit, because I swear to God, you have no idea how bad it is, how dusty it is,” he said.

“It’ll be almost like riding on mud when it mixes with water. It might be better when it dries, but if we’ve gotta go out there and ride (in the wet) I’ll be interested to see how the grip is.

“From my past experience, and my theory, dirt and water on top of a normal track normally don’t combine too well.”

Miller was 14th-fastest in Friday practice, which was topped by factory Suzuki rider Andrea Iannone.