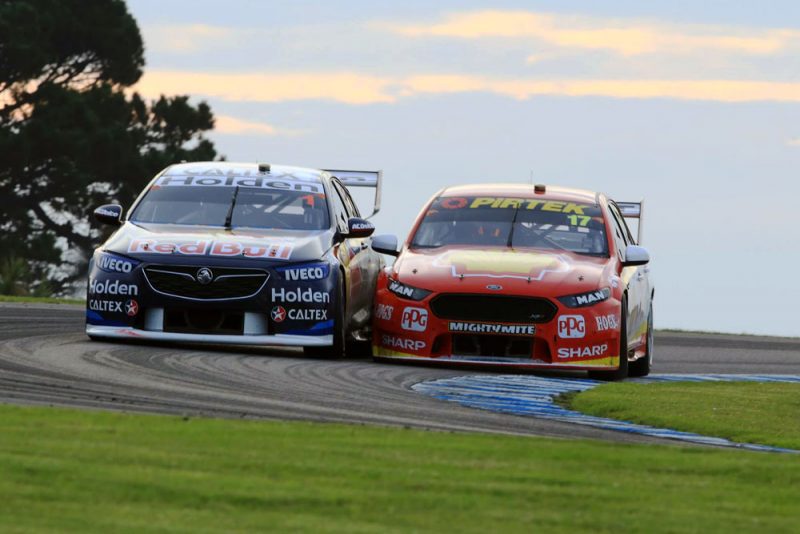 Scott McLaughlin has won Race 9 and taken over the Supercars Championship lead after finally getting the better of Jamie Whincup in a tense duel at the WD-40 Phillip Island 500.

Whincup made a brave move to take the lead at the second corner and effectively led until Lap 41, when McLaughlin squeezed in front before pulling away.

Rick Kelly elevated himself from fifth on the grid to third, while Shane van Gisbergen persevered with power steering problems to take fourth, ahead of team-mate Craig Lowndes.

McLaughlin and Whincup made an even start from the front row but the latter managed to hang tough on the outside at Doohan Corner and set up a pass into the Southern Loop.

Whincup briefly gapped the #17 Shell V-Power Falcon but they entered pit lane nose to tail at the end of Lap 17, so close that there was contact between the pair at the speed limit line.

The #1 Red Bull HRT Commodore just beat McLaughlin, who received brand-new tyres on his working side, into the fast lane.

But for another short period just after their respective first pit stops, the title protagonists ran line astern until both pitted together again at the end of Lap 31.

McLaughlin’s manoeuvre into the fast lane was a carbon copy of his first pit stop, having to just pull up and file behind Whincup.

Despite #1 having green tyres on all four corners and #17 working side only again, it was Whincup who struggled for pace and ran a defensive line particularly at MG corner.

The 2017 champion, who had a straight line advantage, stepped just wide of the ideal line through Southern Loop on Lap 41, prompting McLaughlin to seize the opportunity and drive through a small gap.

From there, the New Zealander edged to a 0.90s win after the 57 laps, his second of the season.

“I’m happy we looked after the tyres at the end; we need to look at them big time for tomorrow,” said McLaughlin.

“I was working him (Whincup) for ages and I need to get close through (Turn) 1; I was good there.

“His thing is so fast down the straight; even in the tow he’s pulling away from me.

“Anyway, the thing’s all good and we’re having fun.”

The result means that McLaughlin leads Whincup by a single championship point.

Kelly emerged third in the Castrol Altima after the first compulsory pit stop cycle and remained in that effective position for the balance of the motor race.

Van Gisbergen sat third initially but lost track position due to a longer fill than Kelly at his first pit stop.

He began to struggle physically with a power steering issue in the #97 Red Bull Commodore but appeared to be doing enough to salvage a fourth position finish.

However, with six laps remaining van Gisbergen fanned the throttle and let a speedier Lowndes go past.

The Autobarn Lowndes Racing driver set off after Kelly but ran out of laps to challenge Car #15.

With that, Lowndes appeared to let van Gisbergen reclaim fourth position on the final lap.

Chaz Mostert had a strong finish to the race to rise to sixth position in the Supercheap Auto Racing Falcon, ahead of the Erebus Motorsport Commodores of David Reynolds and rookie Anton De Pasquale.

Fabian Coulthard, who was second-fastest in qualifying but then excluded for having too much rear wing angle, climbed from the rear of grid to mid-pack during his first stint.

The #12 DJR Team Penske Falcon made little progress thereafter and took the chequered flag in 13th.

Michael Caruso also moved forward from the back row of the grid, where he started after causing a red flag early in qualifying.

The #23 Drive Altima was pitted at the end of Lap 1 and again 26 laps later, eventually finishing 18th.

James Golding finished seven laps down in 25th after first copping a penalty for turning Simona de Silvestro around then spending time in the garage with steering damage on the #34 Garry Rogers Motorsport Commodore.

Nick Percat was another five laps off the pace, finishing in last position after splitter problems on the #8 Brad Jones Racing Commodore.