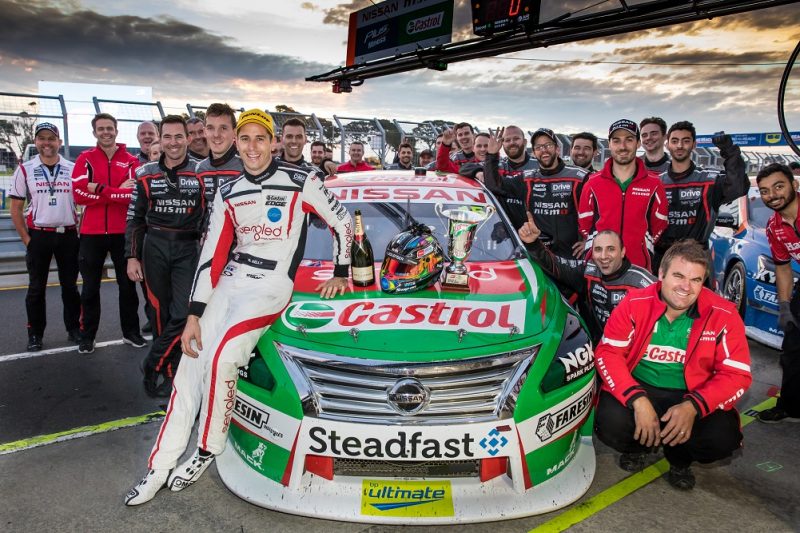 Rick Kelly has mused at the unexpected nature of his podium in Race 9 of the Virgin Australia Supercars Championship at Phillip Island.

Kelly was in a jovial mood in the post-race press conference having finished third, which became second when a penalty was subsequently handed to Jamie Whincup, in the first leg of the WD-40 Phillip Island 500.

The result came as a surprise to the 35-year-old after struggling for pace in the Castrol Racing Altima during Friday practice.

Kelly went on to qualify on the third row of the grid before favourable early speed led to a decision to short fill at the first pit stop cycle, leading to a gain of three positions to third.

The #15 Nissan held the same position for the rest of the 57-lap race, eclipsing the team’s previous best result for the season by six positions once elevated to runner-up.

It was also Kelly’s first podium since the final race of the 2015 season.

“We rolled the car out pretty good initially yesterday and then we had a tough old practice session towards the end,” he recalled.

“In fact, I thought the highlight of the weekend was going to be schnitzel night last night.

“We rolled greens (tyres) everywhere and we were in the twenties (22nd in Practice 2).

“We changed some stuff overnight and the batch for this weekend was strong and suited us really well so we qualified well.

“I was conservative off the line and on the first lap and then we found that we had a really good car underneath us, so we did the strategy of short filling so we had some clear track, and made the most of it in the middle stint.

“(We) pitted before Shane (van Gisbergen) at the end there and went for it for a couple of laps to make sure we came out in front, so I burnt the tyre a little bit and I just tried to hang on to the end which I managed to do.”

The podium came in the 2006 champion’s 500th race start, 64 races after his last podium at Sydney Olympic Park.

Having debuted in the 2001 Queensland 500, Kelly reflected on how he has changed over the course of his career in Supercars.

“It can be challenging, there’s no doubt about that,” he said of the drought.

“You’ve just got to learn to enjoy the other aspects of your life so you don’t go insane.

“The first 10 years of my career I dedicated every living moment to racing, so when you have a tough spell it affects everything else.

“You’ve just got to make sure you enjoy other things and come here feeling happy and ready to go.

“I drive much better when I drive without thinking about driving car; if I think about driving the car and drive off my brain more than the talent then you start to have some troubles.

“It’s easy, you just turn you brain off and go fast.

“I guess that’s a good example as you get older and towards the middle and late part of your career that you’re still learning and changing things to go out and achieve results and I’m certainly no different to that; I don’t give up.”

Kelly is now the lead Nissan in the championship in 16th position.

We got us a fkn trophy!! What a crew. Thanks guys, fantastic effort…. pic.twitter.com/LKgTaOK1PW