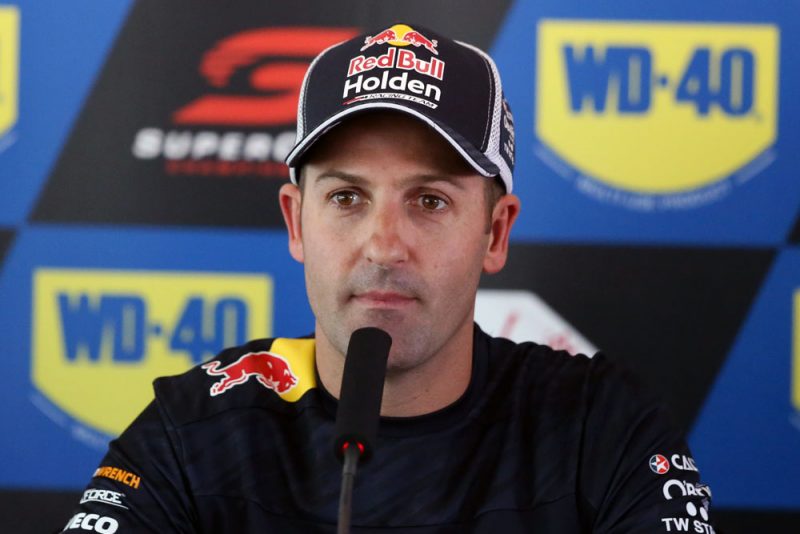 Mark Dutton has explained how mistakenly identifying a cone in pit lane led to Jamie Whincup being penalised out of second position in Race 9 of the Supercars Championship.

Whincup was issued the time equivalent of a drive-through penalty, 38 seconds, which has seen the #1 Red Bull Holden Racing Team Commodore fall from second position to 14th.

The breach was for deactivating the pit lane speed limiter while Whincup was still transiting pit lane following his first pit stop.

Supercars regulations stipulate that “The Limiter must be activated at all times while a Car is moving in Pit Lane,” but there is no official suggestion of a breach of the speed limit.

Dutton has told Speedcafe.com that Whincup mistook the cone which marks where cars must move into the fast lane with that which denotes the end of the speed limited section of pit lane.

“The regs say that the whole time you’re in the pit lane and moving that the pit limiter needs to be on,” he explained.

“What’s happened, Jamie’s pulled out of the pit stop, he’s got the limiter on, he’s accelerated up to 40 (km/h), he’s passed the merge cone, so he’s already got in front of Scotty McLaughlin, and then as he’s passing the merge cone he’s mistakenly thought that was the cone, the derestriction sign, so he’s turned the pit limiter off.

“He’s then realised that isn’t the right cone so he’s turned the pit limiter back on, and then passed the proper cone and then turned it back off again.

“There’s no gain because he was already in front of Scotty McLaughlin but that’s not the rule.

Dutton said that Whincup freely admitted the error when it was raised with him after stewards discussed the matter with the Triple Eight Race Engineering team manager.

“I didn’t know it had happened (at the time) but I automatically thought, ‘Hang on, he’s mistaken the cones.’

“Then I went and asked Jamie what happened and without any prompting he said, ‘Mate, it was all going on, I saw the cone, just as I passed the cone I’ve seen it and turned it off and realised, turned it back on but the damage was done.’”

The result means that Whincup, who led the championship heading to Phillip Island and trailed race winner Scott McLaughlin by a point before the penalty was applied, drops to fourth on the ladder and 76 points off the pace.

Simona de Silvestro was hit with a 15-second penalty for careless driving when the Nissan Motorsport driver punted Jack Le Brocq at MG on Lap 4.

The sanction cost de Silvestro one position, putting Car #78 back to 24th.

Following a report from Supercars Pit Lane Officials, it was alleged that Car #1 deactivated the Pit Lane Speed Limiter prior to the end of Pit Lane following a pit stop. A report from the S&TD included a detailed review of the Supercars Telemetry Data and Control ECU Data for Car #1 which confirmed that Car #1 did not have its Pit Lane Speed Limiter activated at all times whilst it was moving in Pit Lane in breach of Rule C15.4.2. Additionally, compliance with Rule C15.4.2 was checked for all Cars in Race 9. No other breaches of Rule C15.4.2 were established. The Competitor, Triple Eight Race Engineering, admitted the breach and the Stewards imposed a post-Race Pit Lane Penalty (38 seconds) to be added to Car #1’s Race Time for Race 9.