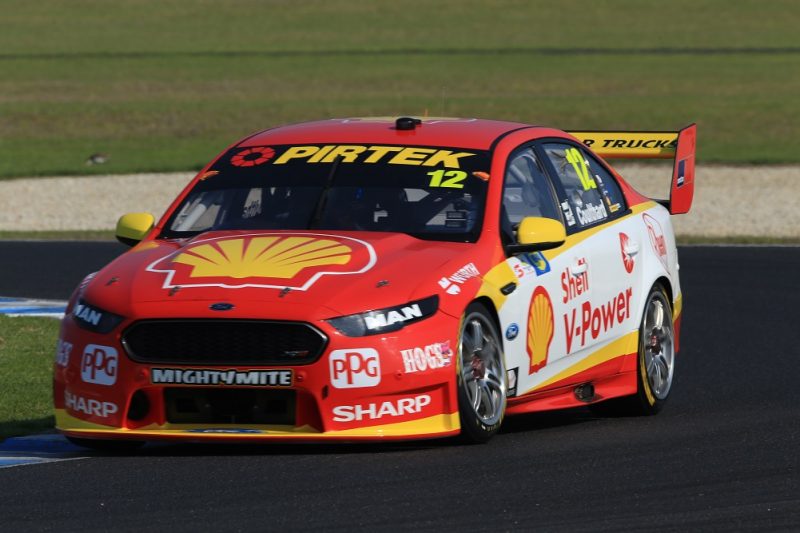 Fabian Coulthard has been excluded from Armor All qualifying for a technical infringement and will start last on the grid for this afternoon’s race at the WD-40 Phillip Island 500.

Coulthard had set the second-fastest time in the 20-minute Armor All Qualifying session, making for a Shell V-Power Racing front row lockout.

Car #12 has subsequently been excluded from qualifying for a breach of regulations concerning the rear wing, namely that it was adjusted to a level exceeding the allowed paramaters.

“A genuine error was made when a change happened in session,” said DJR Team Penske managing director Ryan Story.

“I accept responsibility and whilst it made no difference to the performance of the car, we’ve taken our medicine.

“Unfortunately that means Fabian will start last for this afternoon’s race.”

The DJRTP Fords had been the class of the field in qualifying, with Coulthard 0.3551s faster than Triple Eight’s Jamie Whincup, who had originally qualified third.

Both of the Stapylton squad’s drivers did not even attempt a third run at qualifying like the rest of the field had, in a bid to conserve tyres for the 250km race which followed.

During Parc Ferme following Qualifying for Race 9, Car #12, Fabian Coulthard, was inspected by the S&TD for compliance with the rear wing angle as stipulated in the VSD. Car #12 was found to have been in breach of Rule C1.1.2 and C2.1.1 in that Car #12 did not comply with the relevant VSD during Qualifying for Race 9. The S&TD found the maximum rear wing angle defined in the VSD was exceeded by Car #12. Following an admission to the breach by Racing Team (Aust) Pty Ltd, the Stewards imposed a Penalty of Disqualification of Car #12 from Qualifying for Race 9 of the 2018 Virgin Australia Supercars Championship. By virtue of Rule D7.2.1.2, Car #12 is to start Race 9 from the rear of the grid.

Turns out I’m going to start last.. only way is up from there! #VASC #FabPack