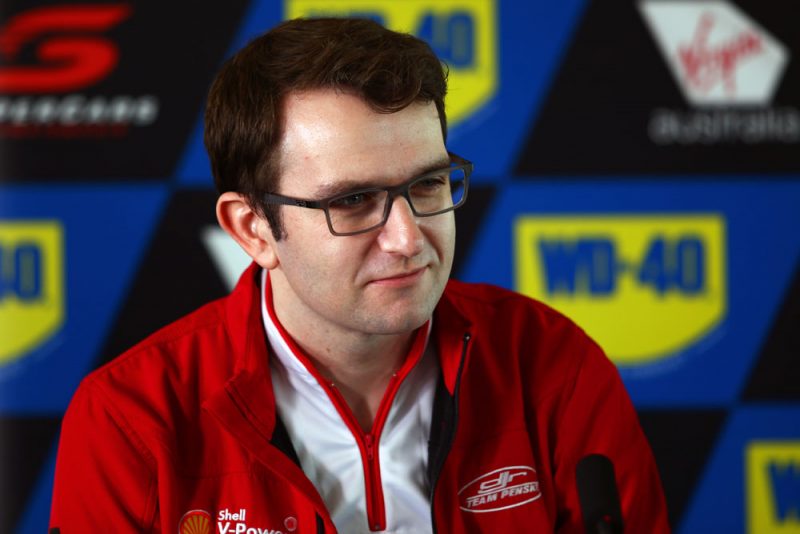 Ludo Lacroix’s involvement in the development of the Ford Mustang Supercar will have “not a huge” impact on Scott McLaughlin’s season according to Ryan Story.

Lacroix and Nathaniel Osborne have been named as the leaders of DJR Team Penske’s and Tickford Racing’s respective efforts in the development partnership also involving Ford Australia and Ford Performance.

While Osborne is Tickford’s chief engineer and does not have a specific role on any of its four Virgin Australia Supercars Championship entries, Lacroix is McLaughlin’s regular race engineer.

The Frenchman has designed a number of aerodynamic packages during his time at Triple Eight Race Engineering, but as a dedicated technical director rather than also working as race engineer.

Shell V-Power Racing manager director Story, however, believes that the team has sufficient manpower to ensure that the Mustang has a minimal effect on its ongoing championship efforts with its FGX Falcons.

“Not a huge amount,” Story replied when asked by Speedcafe.com what impact Lacroix’s involvement would have on McLaughlin’s campaign.

“He will be in charge in terms of the overall broader philosophy but in terms of the actual design work and heavy lifting, we’ve got quite an extensive group of engineers, who are home-based, and Perry Kapper is our chief designer who joined us this year.

“He’ll (Kapper) take a pre-eminent role in the course of development as well, so we’re confident that we’re adequately resourced to get this job done.”

Supercars CEO Sean Seamer was quick to stress that the category itself would be contributing to the development of the Mustang.

The task presents the new challenge of draping a coupe body over the control chassis as per Supercars’ Gen 2 regulations.

“It’s worthwhile also pointing out that the category’s invested a lot in technology and resources to support this process as well,” said Seamer.

Story added that the parties involved in the development would continue to work with Supercars on the project, including with category sporting and technical director David Stuart.

“I think it’s probably the right time to make that observation, too, that throughout this process I have to pay tribute to Sean and to David Stuart and his team.

“They’ve done a tremendous job in making themselves available and to have the discussions as we’ve gone along the way to understanding how we can turn Mustang into a Supercar, and we foresee that continuing as we go right through the process.

“It’s great to see that we’ve actually got the depth and the resource within the category to do these things properly.”