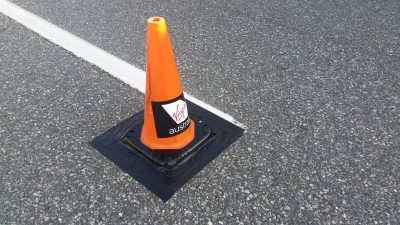 Supercars has moved to prevent a repeat of last year’s WD-40 Phillip Island 500 where a spate of penalties were handed out to cars caught crossing the working lane markings at pit entry.

A dashed line runs the length of the narrow Phillip Island pit lane, dividing the fast lane from the working lane.

Drivers are not permitted to cross that line, save for entering and exiting their pit bay, at which point they can cross it a maximum of two garages away from their own.

For last year’s Sunday race a witches hat was placed at pit entry following comments that driver’s couldn’t see the line as they entered the pit lane.

In an effort to prevent a repeat this year, officials have placed two witches hats at pit entry.

The first is taped to the ground at the start of the line, with drivers entering the lane set to pass to the right of the cone.

A second cone, further up the lane, is to delimit the point at which Will Davison and Lee Holdsworth are allowed to blend into their pit bay, with 23Red Racing and Preston Hire Racing sharing the first pit boom upon entering pit lane.

The dashed line has also been shorted, with the first two hatchings painted over on Thursday ahead of the weekend beginning.