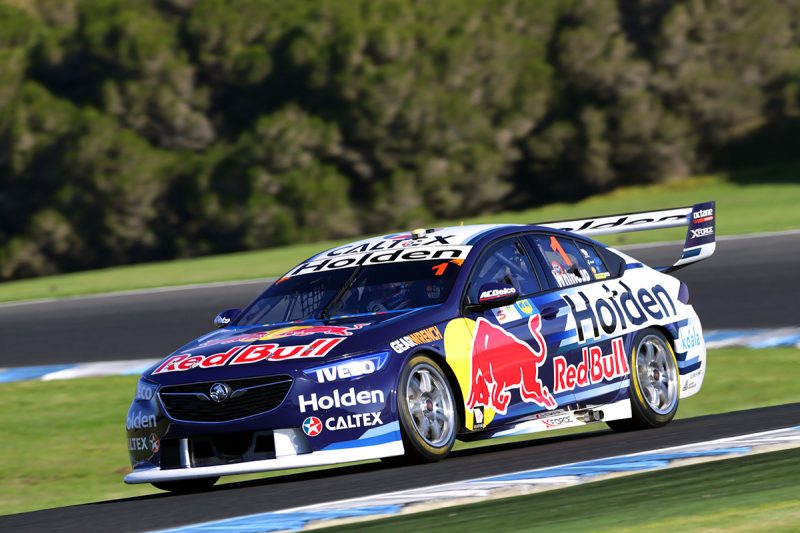 Whincup set his fastest time on his first flying lap, an effort that lasted the distance despite a late flurry which saw times tumble in the closing seconds.

Whincup headed Scott McLaughlin by more than 0.2s after the 40-minute session, with the second DJR Team Penske Falcon of Fabian Coulthard less than a tenth further back.

“Detuned the car unfortunately during the session, so I didn’t go as quick at the end.

“Both Penske cars are very quick so although we went fast early, we’re probably not as quick… the track wasn’t as good as the end.

“We changed the car quite a bit so I’m putting it down to the set-up change, not so much the tyre.”

The session start was delayed by 30 minutes after a heavy Carrera Cup crash immediately prior to the session saw the tyre wall at Lukey Heights undergo repair.

When the session began, Whincup set a 1:29.9856s lap on his first flying lap, a time 1.6s faster than anyone else had managed to that point in the session.

The opening minutes were less busy than opening practice, with many opting to complete a single timed lap before returning to the pit lane.

The session was interrupted with a red flag 10 minutes in for debris on the front straight, which appeared to come off Tood Hazelwood’s Matt Stone Racing Falcon.

Behind Whincup’s early salvo, a number of other drivers improved on their own personal bests once the session restarted, with Rick Kelly moving to third and Fabian Coulthard to fifth.

A locked brake for Coulthard saw the DJR Team Penske driver take to the escape road at the Turn 4 hairpin, running around the return road behind the gravel trap and rejoining.

Heading back into the pits midway through the session, Shane van Gisbergen arrived too hot and found himself on the grass approaching the speed limit sign at pit entry before heading down the lane.

Erebus Motorsport was the first team to respond to Whincup’s early lap, with David Reynolds banking a 1:30.9551s and Antone De Pasquale 1:31.2609s.

They were the first really representative laps other than Whincup’s in the session.

A series of qualifying simulations late in the session saw the order shuffle dramatically in the final moments, including the 23Red Racing entry of Will Davison which jumped to fourth with 1:30.7332s.

Shane van Gisbergen made that fifth place, before Nick Percat and Mark Winterbottom improved to demote Davison to the bottom end of the top 10.

Supercars will next be on track for Qualifying on Saturday at 1205, before the 57-lap Race 9 of the championship at 1545.