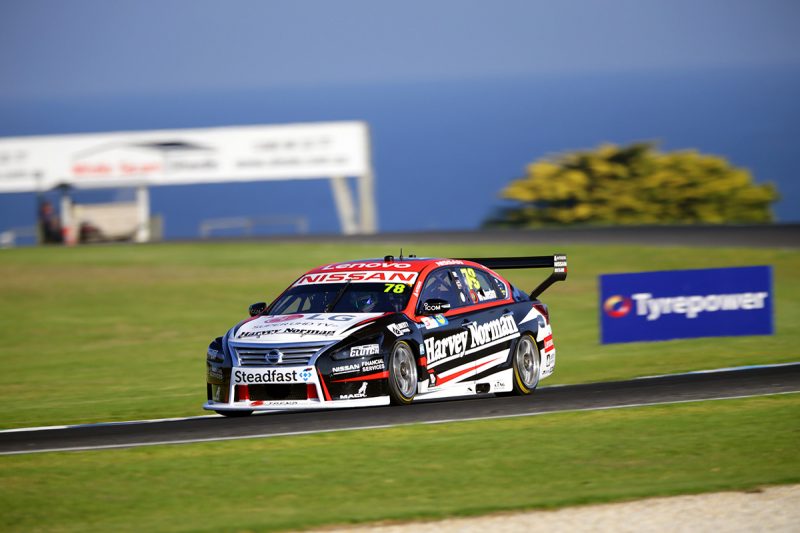 Simona de Silvestro has admitted she has been left frustrated after the opening day’s running at the WD-40 Phillip Island 500.

The Nissan Altima driver managed just the 21st fastest time of the day on combined results, almost 1.4s off the pace set by Jamie Whincup.

Michael Caruso was the leading Nissan performer across both sessions with the 18th best time of the day, 0.3s faster than de Silvestro.

“I like this place, I really like driving around here, but I think as a team we’re not where we want to be,” de Silvestro told Speedcafe.com.

“We have to really look into the books and try to be a little bit better overall.

“So we’ve a little bit of work ahead of us, but I think between us, the four cars.

“I think my pace is okay today but we don’t want to be about P20, it’s a bit frustrating.”

The Swiss driver is looking for a stronger front-end heading into qualifying tomorrow, but was otherwise reasonably happy with her car.

“It doesn’t feel too bad to drive, to be honest,” de Silvestro admitted.

“But we’re quite far off. I think Jamie did a 29.9 which is a big time. We’re nowhere close to that.

“I think just in general we need a bit more grip overall and stuff like that – for us here, work a little bit on the understeer and see what we’ve got.

“We did a few runs on older tyres and we seemed okay but definitely the race is going to be quite long tomorrow,” she added.

“We just need to have a clear race, and qualify okay and see how we get out of it.”

De Silvestro had been 14th fastest in opening practice at Phillip Island, a result which came on the back of a strong showing on Friday at Symmons Plains.

Brake issues across the balance of the weekend hampered her progress, though the 29-year-old says she’s satisfied with her own performance.

“I’m feeling comfortable in these type of cars and it showed on the Friday in Tassie, and today as well in first practice we were 14th but the thing is, as a team, we’re not where we want to be,” de Silvestro admitted.

The Phillip Island 500 continues on Saturday with qualifying for Race 9 at 1205.