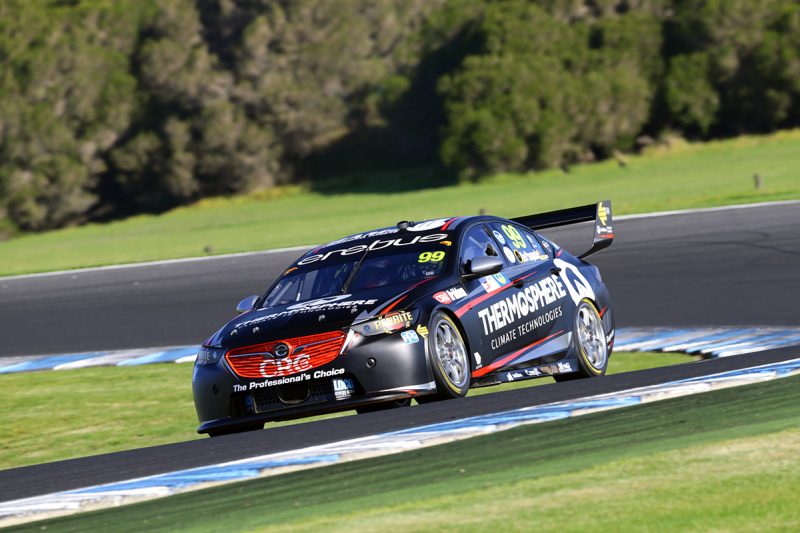 Anton De Pasquale has been left encouraged by all but matching David Reynolds for much of the second practice session for the WD-40 Phillip Island 500.

The rookie shadowed Reynolds after the session restarted following a red flag for debris just over 10 minutes in as the two Erebus Motorsport Commodores assumed second and third position.

De Pasquale even moved a position ahead of with around five minutes remaining, as the rest of the field started qualifying simulations, before Reynolds found more time at the very end of the 40-minute hit-out.

The Bathurst 1000 winner ended the day 13th on combined practice times, one position and 0.0235s ahead of de Pasquale, despite the pair running different set-ups.

De Pasquale, who took a maiden Super2 race and round win at the same circuit 12 months ago, was buoyed by finishing so close to Reynolds on the timesheets.

“It’s good for me obviously because he’s my best benchmark but we’re not too far off the front, front guys,” the 22-year-old told Speedcafe.com.

“I’m feeling quite comfortable as it’s a place that I’m pretty familiar with so that’s always good for your confidence.

“I went pretty well here last year but I’ve got a lot of things to work on still to try and get a little bit more time out that Davey’s gaining on me, but it’s always good when you have someone that’s always consistent that you can compare with.

“Even though we did a very similar lap time, I’m faster in a couple of corners and he’s quicker in a different part of the track, so we can try and gauge each other that way and try and push us both forwards.”

De Pasquale has often been the quickest of this year’s five rookies and had been earmarked as a future prospect after an impressive test day with Erebus last year.

The team’s general manager Barry Ryan reiterated the importance of having an understudy to Reynolds who could push the 32-year-old, who currently sits equal second in the championship.

“We’ve said all along, if we can get someone to get close to David and Dave can learn something off him, it’s going to be an advantage.

“It’s good just to have a team-mate that’s actually capable of doing that, and he’s still only three rounds old. It’s good; exciting actually for the team.”