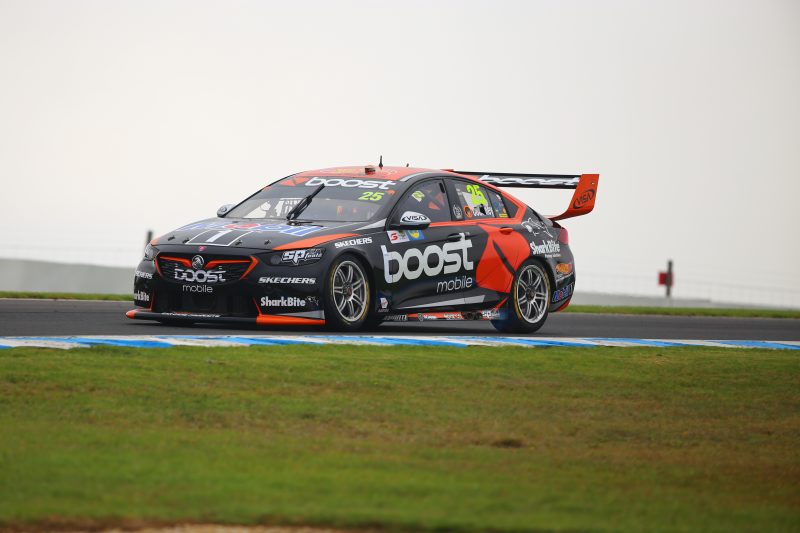 Courtney moved into the the top spot in the latter part of the session, taking over from team-mate Scott Pye who briefly headed the timesheets.

“We rolled out this morning and straight away, first run, first lap, the thing went up the top, so I’m super pumped,” said Courtney.

“The platform of the car feels really quite stable, very consistent in these high-speed, long, loaded corners.

“With that stability and consistency in the corners it gives us as drivers a lot better idea of the grip level you’ve got, so then you can use all of it, where as previously here the car’s been really unsure and quite nervous, so I couldn’t be more happy.”

As McLaughlin headed down the front straight his right Dunlop gave way, leaving the New Zealander to limp the car slowly back to the pit lane before returning to the track to set his best of 1:30.6765s.

Several drivers jumped up the order in the dying moments, including Shane van Gisbergen, Craig Lowndes and Cam Waters.

Pye had taken over at the top of the timesheets from David Reynolds, who had set the benchmark effort for the session.

McLaughlin set the early pace courtesy of his position at the head of pit lane, but quickly found that time beaten.

The DJR Team Penske driver fell outside of the top five in the first half of the session, the leading Falcon driver.

Scott Pye went to the top of the standings just after the halfway point of the session, improving on Reynolds’ best of 1:31.3582s.

His performance was backed up by the sister Walkinshaw Andretti United as Courtney improved to a 1:30.9365s effort to best Pye by 0.14s.

Another quick lap moved Courtney further clear of the pack with a 1:30.6461s which would prove to be the fastest time of the session.

Todd Hazelwood temporarily found himself fourth fastest with little more than two minutes left in the session, making the Matt Stone Racing driver the fastest of the eight Ford runners.

McLaughlin soon ensured normal service was resumed in the Ford camp, banking the second best time of the session, less than a tenth behind Courtney, though Hazelwood hung on to end the session 11th fastest on a 1:31.5911s.

A locked brake from Mark Winterbottom saw the Tickford Racing driver skating through the gravel in the opening minutes of the session.

He was followed by an almost identical off by Mostert after nearly 15 minutes of the session, returning to the pits complaining of front end feel.

The Tickford Racing pair ended the opening practice session 16th and 19th respectively, Winterbottom more than a second off the pace shown by Courtney.

The Southern Loop proved a hotspot with drivers as Andre Heimgartner also found the gravel having grabbed a brake, ending the session in 21st.

The lead Nissan runner was Rick Kelly, who had a spell inside the top five for much of the session before dropping to 12th at the end of the session.

Elsewhere, De Pasquale fell off the road on the approach to Lukey Heights, skimming through the gravel trap and rejoining as the chequered flag flew, the Eerebus Motorsport driver 18th.

Second practice is scheduled to begin at 1435 for Practice 2.