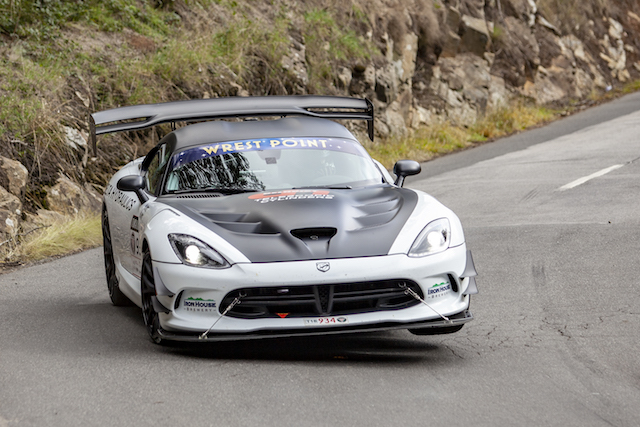 Jason and John White added another three seconds to their overall lead as the 2018 Targa Tasmania reached its halfway mark.

The Whites and their Dodge Viper now lead by 19 seconds having won 13 of the 15 special stages held so far.

Matthew Close and Cameron Reeves gained ground when they won Special Stage 12, before White went eight seconds quicker through the rest of the day.

As he had after each of the first two days, Jason White expressed concern about tyre wear.

“We did a good pace through the Sideling and we weren’t sparing our tyres through, but after that I felt we needed to back off a little, but as soon as we did that Matt Close started taking five-second chunks out of us,” he said.

“We’ll do some wheel alignment tweaks tonight and try and even out the tyre wear a bit.”

Steve Glenney and Andy Sarandis lost ground to Close/Reeves but remain third, ahead of Angus Kennard and Ian Wheeler.

The field makes it way to the west coast when the rally continues tomorrow.