Speedway world to gather in memory of Ivan Mauger

Speedway world to gather in memory of Ivan Mauger 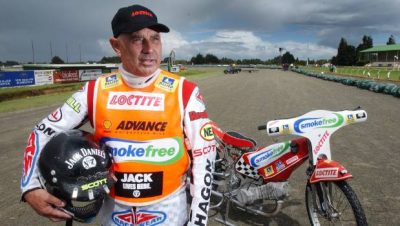 A who’s who of world speedway will travel to Queensland’s Gold Coast next Friday, April 27, for the funeral of Ivan Mauger, who is regarded by many as the sport’s greatest ever rider.

Competitors, officials and fans from Europe, England, USA and New Zealand have already been confirmed for Mauger’s funeral.

The Christchurch-born rider retired to the Gold Coast in 1987 and continued his involvement in the sport as a promoter and mentor to young riders, before he developed cognitive aphasia (dementia) which eventually claimed his life.

“No one has ever had the impact on Speedway like Ivan Mauger,” Crump told Speedcafe.com.

“I never had the honour of racing against him like my dad (Phil), but he was the benchmark for all the riders of my era and certainly those of the 60s, 70s and 80s.

“It is an old cliche, but he was way ahead of him time. Before Ivan came along riders were turning up in black leathers with their bikes on the back of trailers.

“He took enormous pride in the way his bikes, his team and he was personally presented.

“He was ‘Mr Speedway’, and is still regarded as such by many of the sport’s current riders.”

Crump, who wrote the foreword to Mauger’s 2010 autobiography – The Will To Win, which was written with Australian sports journalist Martin Rogers, recalled Mauger’s ‘sharpness’ which was sapped away by his illness.

“It was a very sad process and tough on the family, as it is for all families that have a member with dementia,” said Crump.

“One of his remarkable traits was his sharpness. He was as sharp as a razorblade.

“In the end it was difficult to go and visit him because the spark wasn’t there.

“He was actually a terrific practical joker and had a very, very dry sense of humor, which sadly a lot of people never got to see.”

A memorial service for Mauger will be held at the Church of Christ, 1 Griffith Way, Southport at 11.30am on Friday, April 27.

Speedcafe.com offers it condolences to Mauger’s wife of more than 50 years, Raye and their children Kym, Julie and Debbie.