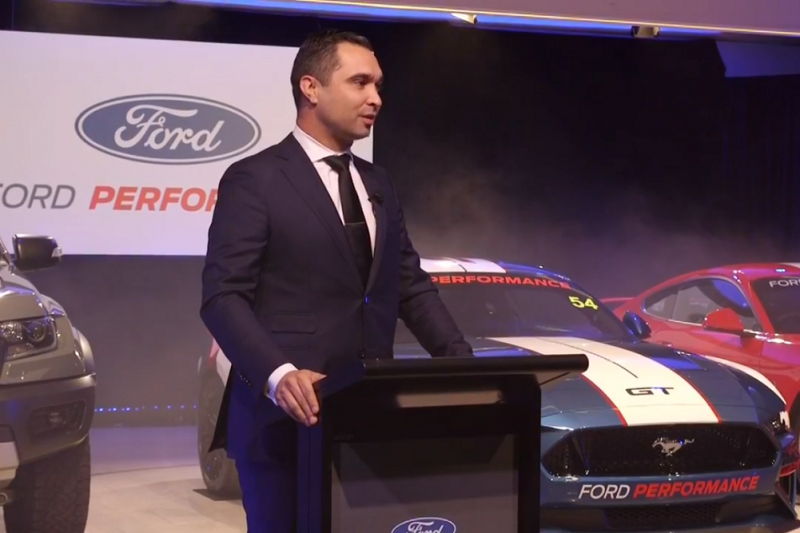 Sean Seamer speaking at the announcement

Supercars CEO Sean Seamer says that the category is looking forward to Ford Australia’s renewed support and the introduction of the new Mustang next year.

Furthermore, Ford teams are now campaigning the FGX Falcon for a second season since production of the road car ceased when local manufacturing ended on the weekend of the 2016 Bathurst 1000.

The Falcon has been the Blue Oval’s vehicle at the top level of Australian motorsport since the advent of the V8 sedan regulations in what was then known as the Australian Touring Car Championship in 1993, starting with the EB model.

The Mustang last raced under Group A regulations in 1986 in the hands of Dick Johnson, whose team DJR Team Penske along with Tickford Racing will field the modern version from next year’s Virgin Australia Supercars Championship, with V8 power.

Ford has launched its Ford Performance brand into Australia in conjunction with its support for a racing Mustang.

“On behalf of everybody involved in the Supercars Championship, I’d like to welcome Ford, Ford Performance, and Mustang,” said Seamer at Ford’s launch event.

“2019 will see a Mustang return to the grid in the Virgin Australia Supercars Championship for the very first time.

“Mustang has a deep and rich history in motorsport, and for us we’re very much looking forward to the teams preparing for their rounds in 2019.

“I’m sure as they start to prepare those cars, excitement and anticipation will continue to build.”

Seamer went on to congratulate Ford Australia CEO Graeme Whickman, adding that, “We know, as you do, that Australians and New Zealanders love performance vehicles, particularly fast Fords.”

The Ranger Raptor, Ford’s beefed up version of its highly popular utility, was also announced as Supercars’ official recovery vehicle.

“I would single out one fantastic vehicle here today; that is the Ranger Raptor,” said Seamer.

“We’re looking forward to that participating in the series as the official recovery vehicle for Supercars.

“It’s going to be a fantastic way to showcase what is a well-rounded truck.”