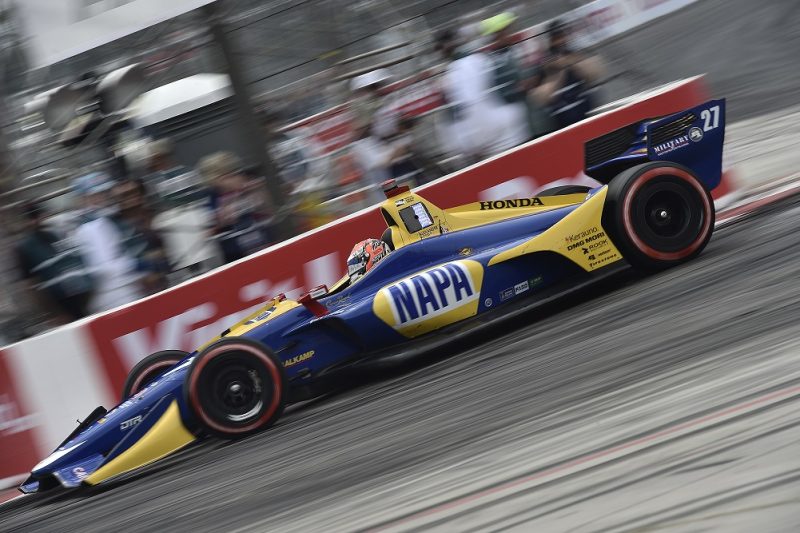 Alexander Rossi was all but untouchable as he won the Toyota Grand Prix of Long Beach, ahead of Will Power.

Rossi effectively led all the way despite twice losing a significant lead under Caution, Power profited when others in front were caught out by the timing of pit stops, and Ed Jones rounded out the podium. 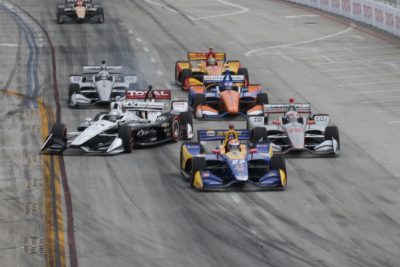 Starting from pole, Rossi headed the field away as one contender was removed at the very first corner when Graham Rahal (#15 Rahal Letterman Lanigan Honda) unloaded third-placed Simon Pagenaud into the wall (#22 Team Penske Chevrolet).

At the same time, Ryan Hunter-Reay clipped Scott Dixon (#9 Chip Ganassi Honda) just in front and had to pit at the end of the lap to have a replacement wing fitted to the #28 Andretti Autosport Honda.

Rossi bolted to a 1.7s lead over Power after the first full green flag lap on Lap 5, at the end of which Rahal took his drive-through.

The #27 Andretti Autosport Honda pilot had more than doubled that advantage in another three laps but lost a few tenths when he began to hit traffic around the Lap 20 mark.

Rossi pitted at the end of Lap 25 but Power (#12 Team Penske Chevrolet) waited until Lap 30, by which time he had ceded most of the two-second margin he had over Dixon in traffic.

Those two and Sebastien Bourdais (#18 DCR w/ Vasser-Sullivan Honda), who was another position further back, pitted together and Dixon jumped Power in the lane.

The Australian rejoined just ahead of team-mate Josef Newgarden (#1 Team Penske Chevrolet), who had been fourth early on, but lost the position soon after on cold tyres.

Rossi therefore led Dixon, Newgarden, Power, and Bourdais when the first round of pit stops shook out, with none choosing to pit again when a second Caution came on Lap 43 for Kyle Kaiser’s stricken #32 Juncos Racing Chevrolet.

A trio of lapped cars protected the leader upon restart on Lap 47 but Dixon came under immediate pressure from Bourdais.

The Frenchman pulled off a stunning move at Turn 1 next time around when he sliced between Dixon and the lapped Matheus Leist (#4 AJ Foyt Chevrolet) at the end of the braking zone.

Bourdais was, however, ordered to hand the position back to Dixon for crossing the pit lane blend line as he opened up the corner, which he did on Lap 54.

He wasted no time regaining it, diving down the inside this time at Turn 1, but lost two seconds to Rossi in the process.

Rossi was first of the front-runners to make his final pit stop at the end of Lap 56 and Power did likewise on Lap 59, but a Caution next time around when Zachary Claman DeMelo walled his #19 Dale Coyne Racing Honda trapped Bourdais, Dixon, and Newgarden.

Bourdais and Dixon actually peeled off the circuit into a closed pit lane, the former reverting to a mere drive-through before pitting later in the Yellow but the latter taking service straight away.

Dixon sat second at the restart, between Rossi and Power, but had to serve a drive-through soon after.

Bourdais’s afternoon got even worse when he was turned around by Jordan King at the Turn 11 hairpin on Lap 71, triggering another Caution when Robert Wickens (#6 Schmidt Peterson Honda) stalled having been forced to come to a complete stop.

Rossi and Power sat nose-to-tail for the final restart on Lap 77, the latter with a 47-second push-to-pass advantage, but he still could rarely stay within a second of the leader.

Rossi went on to take the chequered flag at the end of Lap 85 having never really been seriously challenged, and with that now leads the series.

Behind power, Jones (#10 Chip Ganassi Honda) held off Zach Veach (#26 Andretti Autosport Honda) in the battle for the minors while Rahal recovered to finish fifth, the same position as he started.

Marco Andretti (#98 Andretti Herta w/ Curb-Agajanian Honda) was sixth ahead of Newgarden, who had to wait until pit lane opened to pit under the third Caution.

Dixon ended up 11th and Bourdais 14th having had to take a replacement front wing after the incident with King.

Hunter-Reay lost a tyre when he got loose and touched by King as a result before incurring more damage late in the race on his way to 20th.

Round 4 of the Verizon IndyCar Series is the Honda Indy Grand Prix of Alabama at Barber Motorsports Park on April 20-22.