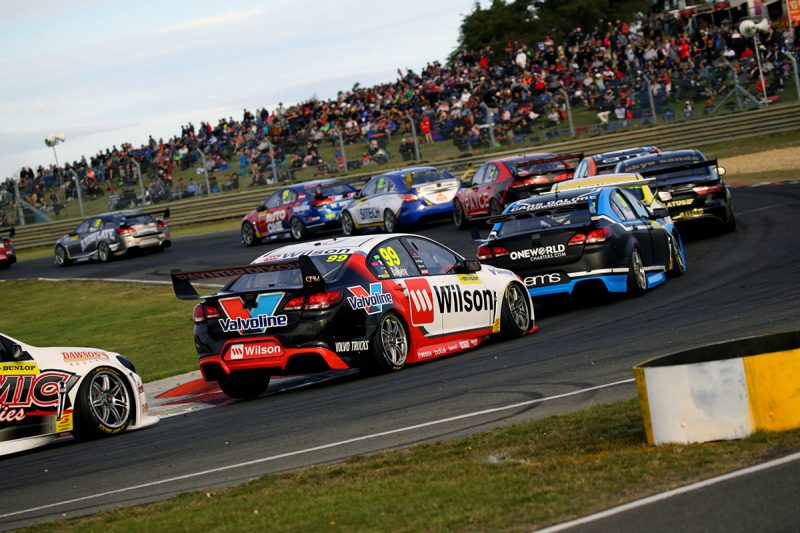 The Super2 field at Symmons Plains

Driving standards and the appropriateness of points penalties have been questioned after last weekend’s incident-filled Dunlop Super2 Series round at Symmons Plains.

Round 2 of the season saw three penalties handed down for ‘reckless driving’ after similar incidents at the Turn 4 hairpin.

Shae Davies and Jake Kostecki both slid into other cars during Race 1 when they arrived at the slowest corner on the calendar with brakes locked, the latter’s hit so big that he could not drive his car back to the pits.

Mason Barbera made a similar error in Race 3 which saw him, like Davies and Kostecki, penalised 35 series points.

A chaotic start to Race 3 was caused when Jack Smith spun after contact with Garry Jacobson and a bizarre nose-to-tail incident between Tyler Greenbury and Brenton Grove on the warm up lap passed without sanction when officials found in each case that no driver was ‘wholly or predominately to blame’.

A number of more minor incidents were punished by five-second time penalties.

MW Motorsport and Image Racing were among those on the receiving end of Turn 4 incidents, with both team owners suggesting that there are repeat offenders within the field.

“It’s becoming a bit of a trend,” Matthew White, whose lead driver Jacobson was a victim of driving infringements on two separate occasions in Race 1, told Speedcafe.com.

“It shattered our weekend and there were a few people that fell victim to the same thing, but it’s the same old people who keep doing it and it’s a bit frustrating.”

Terry Wyhoon’s Image team fields the driver hit by Kostecki at the hairpin, Adam Marjoram, and held a similar view after Marjoram’s car needed to be sent to a jig once back on the mainland.

“To be honest, it didn’t surprise me,” he told Speedcafe.com.

“It’s one of those tracks that lends itself to a bit of front and rear tapping; you always lose a rear bar and bonnet and damaged front bar.

“After that, it’s ridiculous. You get that concertina effect over at (Turn) 4 of course but just what some of them were doing – there were two or three of them doing exactly the same thing – it’s just crazy.”

Series leader Paul Dumbrell, now into his fifth year in his post-Championship stint in Super2, suggested that some drivers needed to think more about the consequences of a risky move.

“I guess there are a lot of young guys coming through, trying to maximise the opportunity there, and sometimes they get a little bit excited and probably don’t put it into the perspective of a race weekend,” he said when asked about driving standards by Speedcafe.com.

“You obviously can’t get experience sitting on the side of the track – I wish I’d listened to my own advice 20 years ago – but that’s how it is,” he mused.

“To get the experience, you need to be on the track, and sometimes those sort of passes can be pretty… a particular word.”

Both White and Wyhoon suggested that race suspensions or grid penalties need to be issued, rather than serving non-title contenders with points penalties or well-backed drivers with fines.

“The stewards issue penalties, that’s fine, but if you’re not in the championship it probably doesn’t have much of an impact because they’re normally a points or (race) position penalty,” said White.

“The only way it’s probably really going to get through is a probation period which then goes into an exclusion for a round or two.

“I’m open to suggestions from Supercars or stewards or CAMS about what they can do about it.

“Maybe there’s nothing they can do about it but at the end of the day it’s just frustrating.

“We had all three cars (Jacobson, Alex Rullo, Dean Fiore) hit within five laps in that last race; that was pretty hard to watch.”

Wyhoon said, “I think you’ve got to penalise their racing, like next race they start rear of grid, or if it’s a bad enough incident they mightn’t start the next race.

“It’s the only thing that’s going to make some of these young kids stand up and go, ‘Wow, I’ve done something wrong here,’ not write a cheque or go, ‘Well now I’m in 15th (in the series) and I was 14th.’

“I’m not talking a (mere) rub either, (but rather) absolutely stupidity, and if it continues then put them on a good behaviour bond.”

Supercars Driving Standards Advisor Craig Baird, who Speedcafe.com sought comment from about the issue, said that he had a responsibility to work within the prescribed list of penalties and apply them consistently.

“To say that he’s not in contention and he is, that’s probably not really relevant.

“But no matter what you give penalty-wise, it will affect some more than others, and at the beginning of the year we’ve got to give everyone the same opportunities.

“It’s a pretty simple platform really, and Supercars have a recommended penalty system.”

The Super2 Series continues at the Perth SuperSprint on May 4-6.

Next Story Suspected turbo failure for Ricciardo in Prac 3