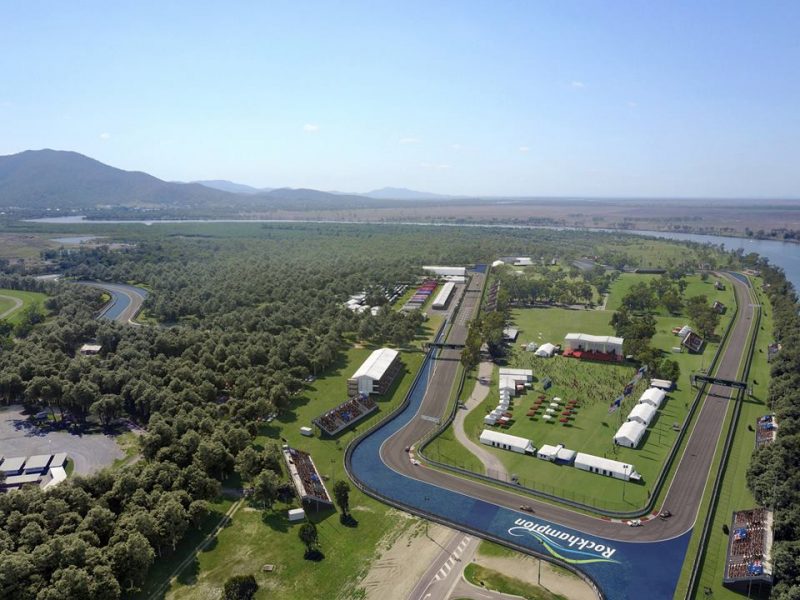 A render of the circuit overlaid on a photograph of The Common in Rockhampton pic: Rockhampton Regional Council

Rockhampton Regional Council has announced receipt of a feasibility study and track designs relating to a potential Supercars race in the Queensland city.

The proposal is an upgrade and significant extension of existing roads within ‘The Common’, a suburb used for sport and recreation including the Rockhampton Jockey Club.

The roads would technically form a street circuit but the circuit would not impact on the Rockhampton CBD, which is located on the opposite side of the Fitzroy River.

According to a release from Rockhampton council, which has already had talks with Supercars, the study provides the impetus to “pursue formal negotiations with Supercars Australia.”

Rockhampton Mayor Margaret Strelow said that the completion of the study represents the next step in its endeavours to land a Supercars event in the city.

“Council has worked closely with consultants experienced in developing and managing motor sport events, and with The Common chosen as the preferred site, we now have an impressive business case to present to Supercars Australia and potential stakeholders,” said Mayor Strelow.

“The Common offers Supercars a truly unique venue for this world-class event with stunning backdrops, close proximity to the CBD and ease of access.

“By choosing a greenfield site instead of a street circuit, we have far fewer constraints when it comes to design, which means Council and Supercars can make this the best track in Australia.”

Council estimates construction cost at around $20 million, including $15 million for the track itself, but claims that the event would yield that amount in increased economic activity in the first year.

“The feasibility study takes a conservative approach and more than compensates for the preliminary nature of cost forecasts at this stage,” Mayor Strelow said.

“The three day event would draw more than 130,000 people to Rockhampton, inject $14 million directly into Rockhampton and a further $7 million state-wide – offsetting constructions costs after just one event.

“The next step is to progress with detailed designs and work with various parties and levels of Government to turn this dream into reality.”

Rockhampton is located around halfway between Brisbane (which is approximately 600km to the south by road) and Townsville (approximately 700km to the north), just inland from the Queensland coast.

Supercars has confirmed that it is in talks with Council.

“The value and success of regional major events are proven, none more so than those in Newcastle and Townsville which is in its tenth year, delivering more than $300 million in economic impact and more than one million visitor nights.”