Home » News » Super2 » Fullwood: We finally have feedback from Falcon

Fullwood: We finally have feedback from Falcon 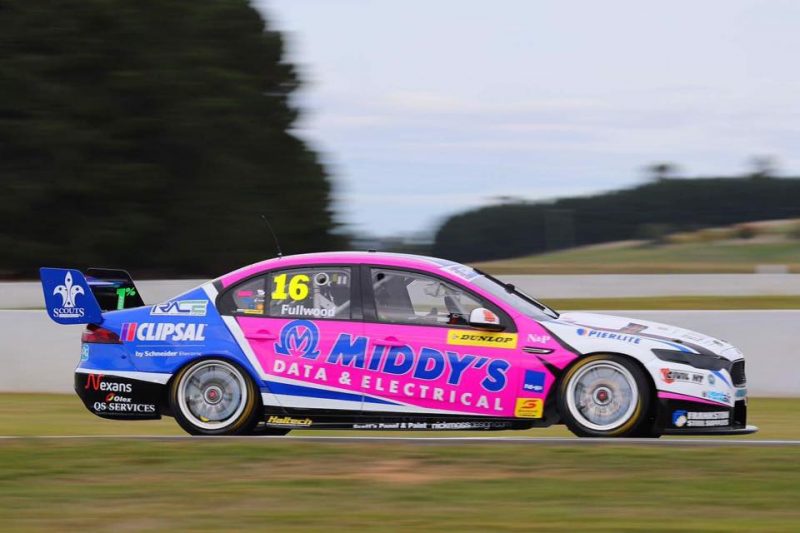 Bryce Fullwood says that he is buoyed by finally realising some set-up responsiveness from his ex-DJR Team Penske Falcon by the end of the Symmons Plains Super2 round.

Fullwood is one to watch in the Dunlop Super2 Series in light of his move to Matt Stone Racing and one of the team’s two newly acquired ex-DJRTP FGXs.

However, the Territorian has struggled in each of the first two rounds.

He qualified 16th-fastest in Adelaide (two faster cars were subsequently excluded for parc ferme infringements) and ended up in 21st and then last in the 23-car field in the two 10-minute Armor All Qualifying sessions at Symmons Plains.

In Round 1, the #16 Middy’s Falcon finished the three races in 12th, 10th, and 19th, the latter after taking a drive-through for kerb overuse while running ninth.

Race results in Round 2 were 17th, 18th, and 15th, having been one of many that had to take a hasty detour when Jack Smith was turned around near the front of the field at the start of Race 3.

Remarkably, Fullwood sits 10th in the series, albeit more than a full round’s worth of points (326) behind leader Paul Dumbrell.

The 19-year-old says that he can build on his Tasmania weekend after the team gleaned some set-up insights from the final race.

“It was a tough weekend for us, however the positives for us were that we did have some feedback from the car in the last race,” he explained.

“We have been struggling to get any feedback from the car when we were making big changes and in the last race we did get some direction.

“Leading into Perth (Round 3) we have some idea of what parts of the car have been holding us back, so we can start working hard between events to get it sorted.

“Despite the circumstances I’m stoked that we are 10th in the championship; I don’t feel like we have earned that spot but when other people make mistakes you have to be there to capitalise on them.

“Hopefully at the next round we can move forward and start to climb the championship leaderboard like where I believe we belong.”

MSR’s two ex-DJRTP Falcons are split across the Virgin Australia Supercars Championship, where team and driver Todd Hazelwood are in their first full season, and Super2.

However, with twin spring suspension not allowed in Super2, set-ups from a Championship-spec car do not necessarily translate into Fullwood’s ride.

Round 3 of the series at the Perth SuperSprint on May 4-6 could shake up the middle of the ladder, which is quite tight at present with 18th-placed Nathan Morcom only 34 points behind Fullwood.

Tyler Greenbury, who is driving MSR’s Triple Eight-built VF Commodore with which Hazelwood won last year’s series, is among those in 13th.