Rossi: Marquez hopes that you crash

Rossi: Marquez hopes that you crash 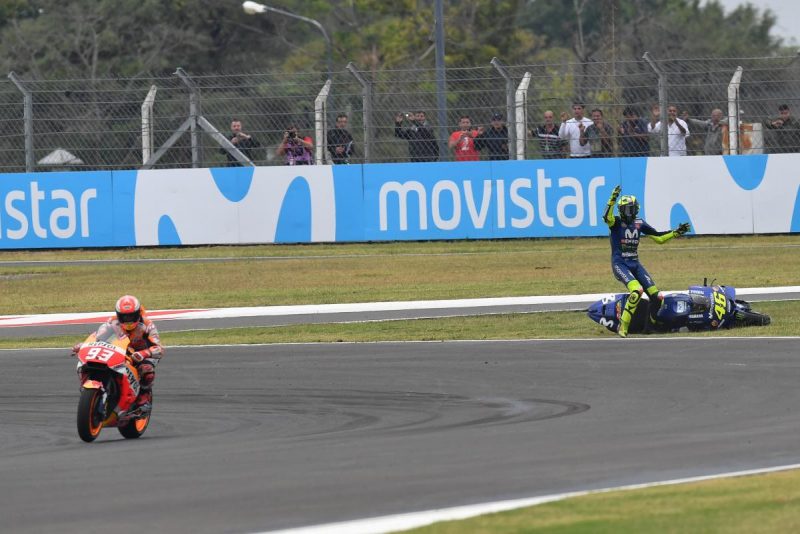 Valentino Rossi has delivered a scathing critique of Marc Marquez’s on-track conduct, including a claim that the Spaniard deliberately tries to cause competitors to crash, after a controversial Argentina MotoGP.

Rossi fell late in the race after contact with Marquez as the latter attempted to pass, the final major incident of a bizarre race at the Autodromo Termas de Rio Hondo which has reignited the rivalry between the two superstars.

Marquez was forced to serve a ride-through early in the piece for starting from the grid rather than pit lane as ordered by officials after his bike stalled.

The penalty dropped the #93 Repsol Honda from first to 19th.

Marquez had risen to seventh when he caught Rossi and lunged down the inside at Turn 13 on Lap 20. 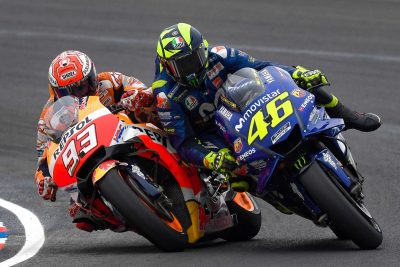 Contact occurred, causing Rossi to run wide on the still partially damp track and drop his Movistar Yamaha on the wet grass.

Marquez took the chequered flag in fifth but was handed a 30-second penalty for ‘irresponsible riding’ which relegated him to 18th, one position above where Rossi ultimately finished.

The incident, which was not Marquez’s first of its type in the race alone, left the veteran ropeable.

Marquez had already been punished for a similar incident earlier in the afternoon when he barged past Aleix Espargaro.

The Gresini Aprilia rider managed to stay upright, but Marquez was directed by officials to hand back the position.

There had also been a near miss in Free Practice 1 on Friday when Marquez carried too much speed as he closed in on a trio of riders at Turn 5.

The defending champion, who admitted that the incident was “dangerous”, said that he chose to open the throttle and send his Honda through a small gap between Aleix Espargaro, Karel Abraham, and Maverick Viñales in order to avoid a collision.

Now that was CLOSE 😦

Marquez runs it in a little too hot 🔥 pic.twitter.com/JlgJp5re11

Rossi alluded to that incident and other examples of what he perceives to be reckless riding by Marquez.

He even claimed that the 25-year-old deliberately tries to cause his rivals to crash.

“If you take for example what’s happened this weekend, one by one can happen, can happen to everybody,” said the Italian post-race.

“You can make a mistake in braking, you can touch the other guy, (it) happens, this is racing.

“So if you start to play like this, you raise the level to a very dangerous point.

“Because if all the riders race like this, without any respect for the rivals, this is a very dangerous sport and (it will) finish in a bad way.”

“(MotoGP race direction) have a big responsibility. They have to do something (so) that Marquez doesn’t behave more like this.”

Marquez claimed that there was no malice intended when he attempted the overtake, attributing the coming-together to the changeable track conditions.

“I think I didn’t make anything crazy,” he said.

“Today what happened to Valentino was a mistake, consequence of the track condition because I locked the front.

“You needed to understand how the track condition was; of course in that line was dry but I take wet patch, lock the front, release the brakes.

“Okay, I had the contact, I try to turn and then when I see that he crash I just try to say sorry.”

Rossi, however, claimed that Marquez has a complete lack of respect for his fellow riders.

“This is a very bad situation, because he destroyed our sport, because he don’t have any respect for his rivals, never,” he said.

“When you go 300 kilometres per hour on the track, you have to have a respect for your rival, you have to be strong, you have to make the maximum, but like this (it) is over.”

Marquez and Rossi had notably clashed in Malaysia in 2015, when the latter appeared to deliberately kick Marquez, causing him to crash.

Rossi was demoted to the back of the grid for the following race, the title-decider in Valencia, and handed three penalty points on his racing licence.

At the very start of the most recent race, Marquez was again the centre of attention when he disobeyed protocol in bump-starting his stalled Honda before riding back to his grid box against the direction of the circuit.

MORE DRAMA! Now for @marcmarquez93 on the grid! 😮

That indiscretion led to the ride-through which arguably set off a chain reaction culminating in the clash with Rossi.