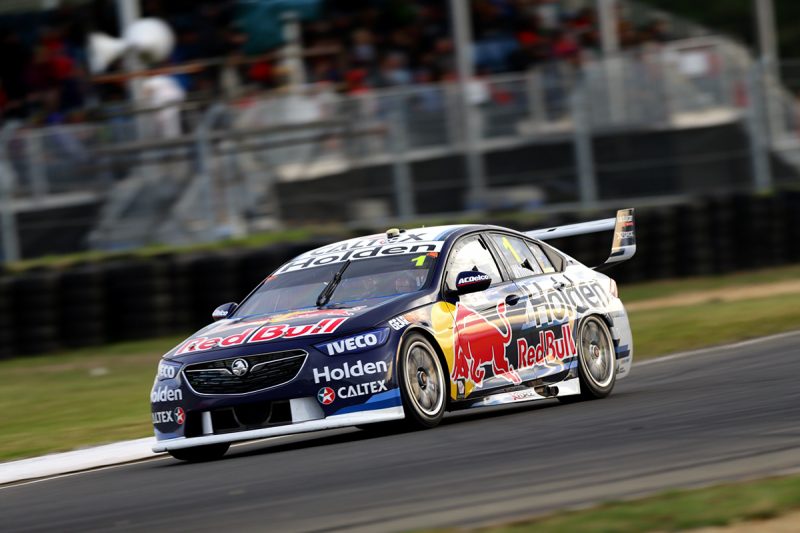 Jamie Whincup has set the fastest lap in Supercars Practice 4 at Symmons Plains but all four Tickford Falcons will have to go into the first part of Qualifying for Race 8 of the championship.

Whincup was first for most of the 20-minute session though Triple Eight team-mate Craig Lowndes briefly put himself at the top of the timing screen.

Lowndes clocked a 0:50.7212s in the Autobarn ZB Commodore with a couple of minutes remaining before Whincup went just 0.0308s quicker.

“We learnt a lot from yesterday,” said Lowndes.

“We had good tyre life yesterday, you normally spring up for qualifying but this was a practice session so you’ve still got to learn a little bit this morning.

“We were good enough obviously to be the in top 10. Things are looking really positive for us at the moment.”

Scott McLaughlin was just over a tenth off the benchmark in his Shell V-Power Falcon, while team-mate Fabian Coulthard also earned a bye to Part 2 of Armor All Qualifying in ninth position.

Jack Le Brocq’s breakout weekend continued when he finished fourth-fastest in the Tekno Autosports Commodore, after he went through all three parts of qualifying on the Saturday then finished 10th in Race 7.

“I probably would have preferred to go straight through (into Part 2 of qualifying) to be honest. That was the aim for that session,” lamented Waters.

“We’re just kind of struggling with the cars, all four of us have got kind of a similar problem.

“It’s weird but we’re slowly chipping away and all trying to work out what it is.”

Scott Pye too missed the cut-off in 12th position.

There is now a short turnaround to Armor All Qualifying at 1105 local time/AEST.

Next Story Mostert: ‘Something feels broken’ in car