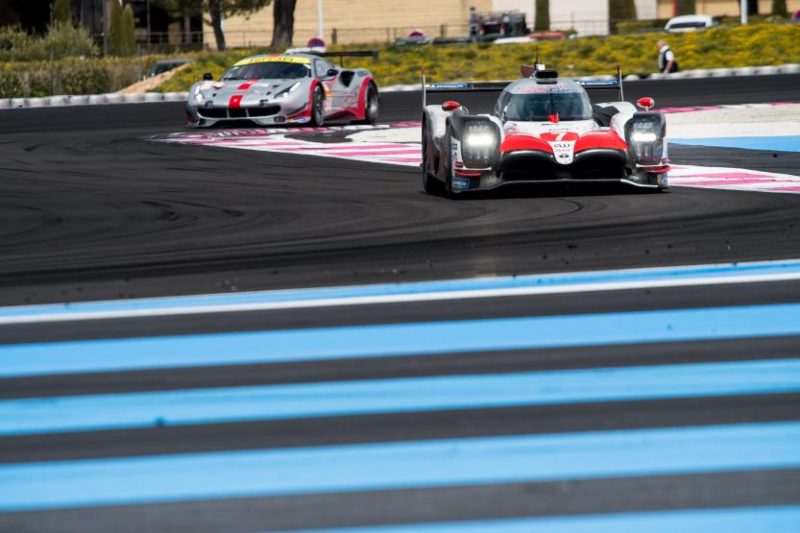 A lap which was run outside the rules took Toyota Gazoo Racing to the top of the times in the FIA World Endurance Championship Prologue at Paul Ricard.

Mike Conway’s 1:32.662s on Friday aboard the #8 Toyota TS050 Hybrid, which put him two seconds clear of the sister #7 car, was set outside of the FIA’s Equivalence of Technology regulations.

Confirmation from the team’s technical director, Pascal Vasselon highlighted that both of its cars ran unrestricted while testing a new cooling system up until 5pm on Friday.

When only taking into account the laps set after 5pm on Friday, it paints a very different picture of the pecking order, with the non-hybrid SMP Racing prototype the quickest of the bunch on a 1:37.034s.

Toyota’s best time run within the parameters, a 1:38.142s, was only good enough for fifth.

The Japanese manufacturer managed the most mileage, with the #7 completing 839 laps as part of the 30-hour full endurance simulation.

Porsche proved quickest in the GTE-Pro class after Gianmaria Bruni set a 1:51.332s during the night to grab the top spot aboard the #91 Porsche 911 RSR.

The sister car ended the Prologue second, half a second down on the #91, while Chip Ganassi Racing’s two Ford GTs followed closely in third and fourth.

Ferrari’s fastest 488 EVO was fifth, two seconds off the class pace courtesy AF Corse, while the new 2018 BMW M8 and Aston Martin Vantage were sixth and seventh in class respectively.

The Gulf Racing Porsche which Australian Alex Davison will share with Ben Barker and Michael Wainwright was second in GTE-Am, behind the class pace-setting #88 Proton Racing Porsche.

Matteo Cairoli delivered the time in the Proton car, a 1:53.129s, which would have been quick enough for fifth in GTE-Pro.

Meanwhile, Australian Matt Campbell lapped up the French circuit behind the wheel of the sister #77 Proton Racing Porsche, with the car finishing the Prologue third quickest in GTE-Am.

FIA WEC next heads to the 6 Hours of Spa-Francorchamps on the 3rd of May for its opening round of the 2018/19 season.

Next Story WORLD WRAP: Doohan on podium in British F4