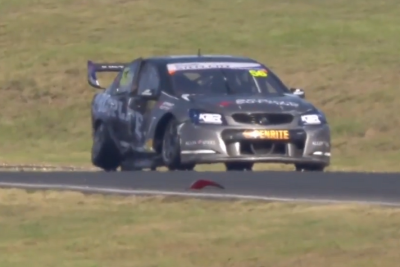 Shae Davies and Jake Kostecki have both been hit with series points penalties for reckless driving incidents at the hairpin in Race 1 of the Dunlop Super2 Series.

Both drivers were relieved of 35 points after similar indiscretions at Symmons Plains.

Davies locked up and slid into the rear end of Garry Jacobson’s MW Motorsport Nissan Altima, causing bent steering to Car #26, on Lap 6.

Kostecki came from several cars back to career into the side of Tyler Greenbury’s #13 Matt Stone Racing VF Commodore on Lap 10, bringing about a Safety Car when he could not limp his damaged #56 Kostecki Brothers VF Commodore back to the pits.

Jacobson finished three laps down in 21st after having to pit to have bent steering fixed, while Greenbury managed to press on and take the chequered flag in 19th.

Davies had a wilder moment immediately after his initial coming-together with Jacobson, which ended his race.

The #67 Paul Morris Motorsport FGX Falcon tangled with Adam Marjoram and spun off the back straight, hitting the bank and the back of a marshal post on driver’s left.

Kurt Kostecki was also penalised for ‘careless contact’ with Jacobson, the five seconds added to his race time seeing him drop from fourth to fifth behind cousin and KBR team-mate Brodie Kostecki.

Dean Fiore was issued the same penalty during the race for his second instance of contact with Marjoram in the space of half a lap at Turn 6.

The MW Motorsport driver crossed the line seventh in the #23 Altima but was officially classified 15th.

Following a post-session RD investigation and an admission by Car #67, Shae Davies of a Breach of Schedule B2 Article 2.1.2 – Reckless Driving (Car #67 was found to have made reckless contact with Car #26 which resulted in Car #26 sustaining damage requiring an extended Pit Stop), the Stewards imposed a penalty of a Loss of thirty-five (35) 2018 Dunlop Super2 Series Points.

Following a post-session RD investigation and an admission by Car #56, Jake Kostecki of a Breach of Schedule B2 Article 2.1.2 – Reckless Driving (Car #56 was found to have made reckless contact with multiple Cars at Turn 4.), the Stewards imposed a penalty of a Loss of thirty-five (35) 2018 Dunlop Super2 Series Points.

Sums up today’s race pretty well!
Not our day in the office. Being taken out at turn 4 resulted in too much damage and having to pit for repairs. Came out 3 laps down and was able finish the race in P21. Eyes forward to tomorrow where we will be starting P5 for race 2 👍🏼 pic.twitter.com/jVFi3JolX3