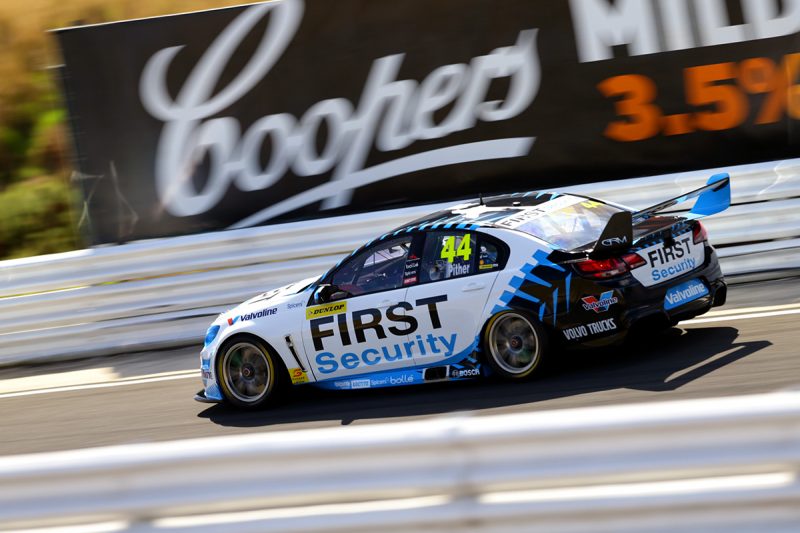 Chris Pither has taken his first Super2 race win of the season and Brodie Kostecki a career best second in challenging conditions at Symmons Plains.

Pither enjoyed a comfortable margin throughout the 30-lap Race 2 which went Safety Car-free despite light rain throughout.

The Garry Rogers Motorsport driver was first away from pole in the #44 VF Commodore and led by just over a second at the end of the standing lap, after which time he was not challenged.

Brodie Kostecki was third out of the opening corners before passing Macauley Jones on Lap 2 when last year’s Bathurst 250 winner ran wide at Turn 6.

He briefly held the lap record before Pither took it back, mostly matching the former Virgin Australia Supercars Championship full-timer for pace before drifting in the final 10 laps.

A second position for the #57 Kostecki Brothers VF Commodore was nevertheless Brodie Kostecki’s best ever in his second season in Super2.

Garry Jacobson finished third mostly by virtue of keeping his nose clean, banking a handy haul of points after the #26 MW Motorsport Nissan Altima was beaten up by other drivers in Race 1.

Jones (#14 Brad Jones Racing VF Commodore) was involved in a number of stoushes as he battled for pace but managed to hold out Paul Dumbrell to finish fourth in the end.

Dumbrell (#88 Eggleston Motorsport VF Commodore) had started 10th but was already sixth when he got a great run off the hairpin to pass Alex Rullo on Lap 7.

He made one more position when Kurt Kostecki was bumped off the road in trying to round up Jones, an incident which passed without penalty.

That incident saw Kurt Kostecki drop to ninth before he drove the #55 Kostecki Brothers VF Commodore back up to 6th by the chequered flag.

Alex Rullo (#62 MW Motorsport Nissan Altima) and Will Brown both appeared to struggle for speed at various times, finishing seventh and eighth respectively.

Brown (#38 Eggleston Motorsport VF Commodore) had actually started second but lost two positions by the time the field ran to the hairpin for the first time, falling as far as ninth before re-passing Jack Smith on the final lap.

Pither and Dumbrell will start off the front row for Race 3 this afternoon at 1245 local time/AEST by virtue of points accrued in the first two races of Round 2.