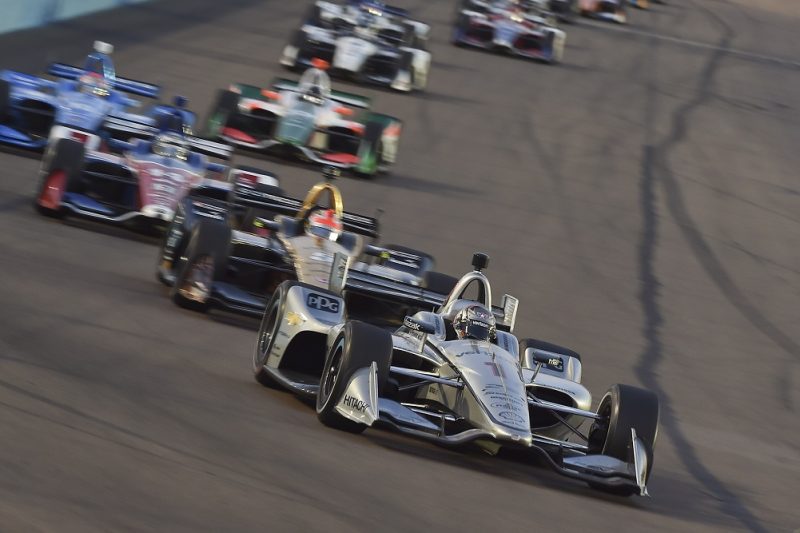 Josef Newgarden has won the IndyCar Phoenix Grand Prix in a thrilling finish.

Newgarden (Team Penske Chevrolet) pitted at a late Caution and charged from fourth to first in the seven laps which remained after the restart.

He finished ahead of Robert Wickens, Alexander Rossi, and Scott Dixon, and takes over the series lead as a result.

Newgarden moved to the front with just three laps remaining, using the high line in Turn 1 to pass Wickens.

“The team did such a good job,” Newgarden said.

“The car was good, the strategy was better, the pit stops were the best. I’m really proud of them and what they did. I think they deserved the win tonight.”

It capped off a race that saw 12 changes for the lead, shared between nine drivers.

Aside from the late caution, which paved the way for Newgarden to win, there was just one other for rookie Pietro Fittipaldi on Lap 41.

Pole-sitter Sebastien Bourdais started from pole but finished only 13th after he was served with a drive through penalty for hitting crewmembers during his stop.

Rossi was also forced to serve a penalty for contact with his pit crew, but charged back onto the lead lap and podium.

Will Power failed to finish after he hit the wall just past the 150-lap mark.

Newgarden now holds a five-point advantage over Rossi in the standings after two of the season’s 17 events.

The IndyCar season now heads to California for the Toyota Grand Prix of Long Beach this weekend.