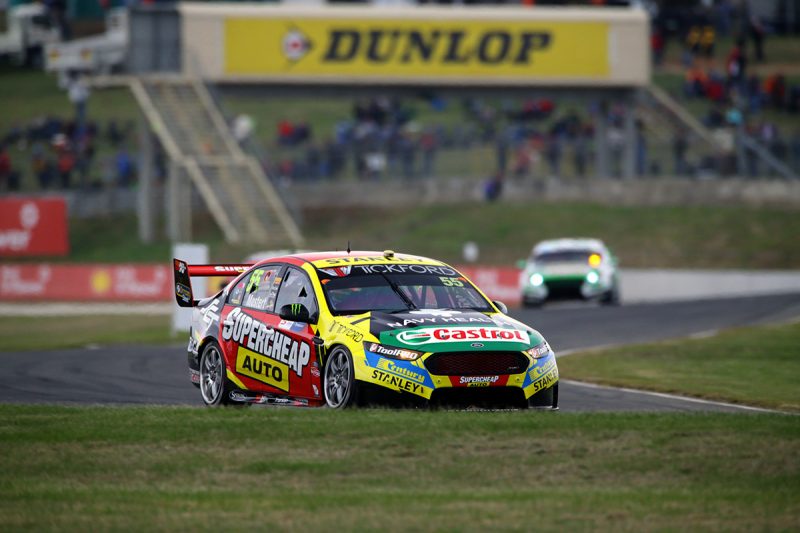 Chaz Mostert has described his Tyrepower Tasmania SuperSprint as a ‘nightmare’ weekend despite finally grafting his way into the top 10 in Race 8.

Mostert had even suggested that something in his Tickford Falcon might have been ‘broken’ after qualifying 11th for Race 8, his best result in any session at Symmons Plains at the time.

The Supercheap Auto Racing entry circulated in 11th until the compulsory pit stops began to take place, when Mostert moved up to sixth position with a shorter first fill.

That gain was all but reversed out when he took up 11th position again once Mark Winterbottom became the second-last driver to take his second CPS on Lap 55.

Only Shane van Gisbergen, who had been left out while he persevered with a throttle problem, had not traversed pit lane again at the time.

When he did on Lap 60, Car #55 inherited 10th and held the same position for the remainder of the race.

“It’s a pretty sad result for us,” lamented Mostert.

“To fight like that all the way to the end for 10th position is not really where we want to be.

“We’ve got a lot of work to do, we’ve got to go back to the workshop and work out what happened this weekend.

“I think Grand Prix and at Adelaide we were pretty competitive (although) we weren’t the most competitive out there.

“This weekend has been an absolute nightmare.

“Last night was probably a little bit damage control for all (Tickford) cars.

“(We) tried to work together as a whole team to try and work out what’s going on and all four cars still finished in the same spots. In the other Tickford garage, Richie Stanaway’s shocking start to his rookie season continued when he couldn’t even complete a lap of Race 8.

The New Zealander incurred significant left-rear suspension damage when he clashed with another car as the field checked up at the hairpin on Lap 1 and retreated to the pits.

The DNF was Stanaway’s third of the eight races to date and he finds himself dead last in the championship, 69 points behind James Golding, with a best race result of 18th at Albert Park.

“It’s probably the worst start to any season I’ve ever had,” said the two-time GP2 Series race winner.

“It’s a longer race today so I wanted to get through there in the opening few laps and settle into a rhythm but got tangled up there on the opening lap and got some suspension damage.

Mostert remains Tickford’s leading man but dropped from fourth and 70 points off the championship lead after the Australian Grand Prix to now sit ninth and 164 points in arrears, even after a change at the top of the ladder.

Mark Winterbottom is 13th in the championship and Cameron Waters 14th after neither recorded a top 10 finish in Tasmania.