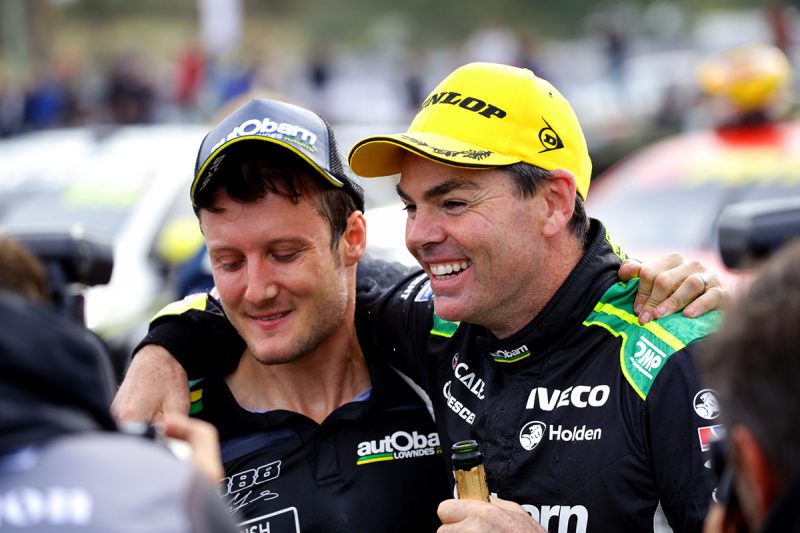 Craig Lowndes says that his victory in Race 8 of the Supercars Championship at Symmons Plains is a great ‘pressure relief’ for he and engineer John McGregor.

Lowndes took his first win in 46 races with a comprehensive performance on the final day of the Tyrepower Tasmania SuperSprint, breaking a drought which stretched back to July 2016.

Last year he had experienced a first winless Supercars season since 2004, the year before he moved to Triple Eight Race Engineering, and recorded his worst championship finish with his current team of 10th.

That form slump coincided with McGregor’s first full season as race engineer on Car #888 after ‘Irish’ had stepped into the role in late 2016, a promotion hastened by Ludo Lacroix’s spell of ‘gardening leave’ before his defection to DJR Team Penske.

Lowndes, who was near the top of the timesheets all weekend in Tasmania and snapped a 12-month longer streak without a pole in Armor All Qualifying for Race 8, said that the triumph was a boost for the whole squad which works on Autobarn Lowndes Racing.

“For Irish we scored a couple of goals this weekend,” said Lowndes.

“Yesterday we got the first podium for the team and today we got our first pole and backed it up with a win. We’ve achieved a lot this weekend as our side.

“There’s still a lot to come (but) there’s no doubt that there’s a pressure relief for us as a team.

“Irish has been copping a bit of criticism in the social world and I think that we’ve hopefully proved now that we can achieve what we need to do.”

The veteran also spoke of the boon which the win is to him specifically.

“There’s no doubt as racer drivers, you drive with confidence and belief.

“Until you win races and do things it’s always disappointing.”

Lowndes said that the improvement was down to a number of factors, including his own driving, a strong base set-up, and cleaner work from the crew at Symmons Plains.

He said, however, that the team still has work to do to be more comfortable with their ZB Commodore.

“We’ve been working on a few (driving) techniques in the car that helped us try to smooth things out,” he explained.

“I’ve probably induced some little issues driving the car, but touch wood that’s a step forward for us.

“There are a few more things we want to do ergonomically in the car to help go further with that, so that’s something we’ll work on between now and Phillip Island.

“You’ve got to have a complete weekend that starts with practice qualifying and the race starts and have a clean race.

“We had great pit stops today which has sort of been a little bit of a hit and miss for us.

“Our strategy and our stops were clean and great, all our elements were working well today and this weekend, and you need that to score any podium, let alone wins.

“I’m really delighted. We’ll go to Phillip Island and we’ll forget about what happens here this weekend and start fresh.

“For us, it’s good momentum going into two tracks (Phillip Island and Barbagallo) that I really enjoy. Fingers crossed.”

Lowndes has moved from 13th in the championship at the start of the weekend to sixth, 61 points behind new leader and team-mate Jamie Whincup, ahead of the WD-40 Phillip Island 500 on April 20-22