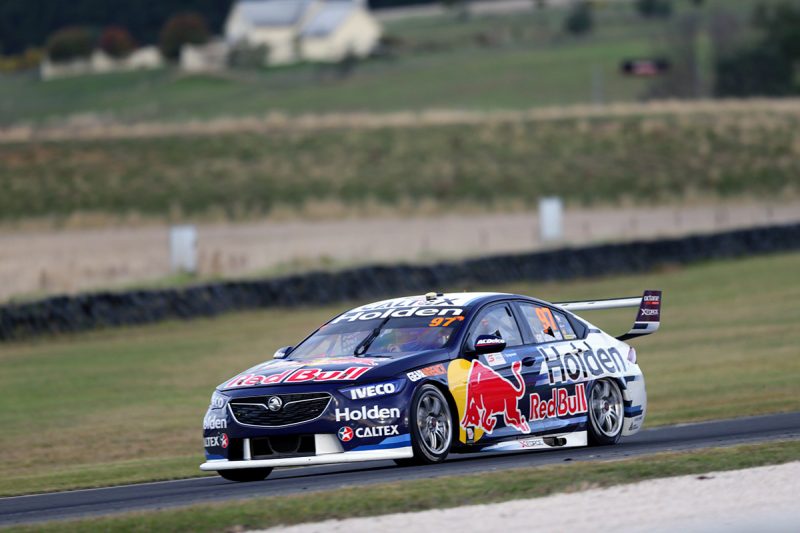 Mark Dutton says that it was important that Shane van Gisbergen salvaged a result for his Virgin Australia Supercars Championship campaign despite suffering a throttle over-run in Race 8 at Symmons Plains.

The 2016 champion was contending for a podium when he began to lose positions due to a problem in the pedal box of the #97 Red Bull Holden Racing Team Commodore.

Van Gisbergen struggled to pull up particularly at the hairpin for several laps in a row tumbling down the order to 15th on Lap 41.

While engineer Grant McPherson gave the New Zealander the option to pit and give up laps while the team attempted a fix, he decided to press on.

Van Gisbergen made his second pit stop on Lap 60, at which time the crew looked at the pedal box but could not remedy the issue.

The 28-year-old did fall off the lead lap and ended up last of the finishers in 25th, scoring 30 points and dropping from the championship lead to fifth.

Those 30 points could, however, could prove vital come Sunday afternoon in Newcastle if recent history is any guide.

Dutton likened the outcome to that of Jamie Whincup and Paul Dumbrell in last year’s Supercheap Auto Bathurst 1000, when their Commodore dropped a cylinder but repair work allowed them to resume and finish 20th.

His main championship rival Scott McLaughlin, on the other hand, recorded a DNF after an engine failure of his own.

The 90 points which Whincup amassed at Mount Panorama proved critical when he won the championship by 21 points after the most dramatic of finales in Newcastle.

“When things don’t go right, you’ve got to salvage what you can,” the Triple Eight team manager told Speedcafe.com.

“At Bathurst last year, without that the whole shape of the season is different.”

Van Gisbergen admitted to over-driving the car in the hope that he could overcome the problem but said that he was not close to parking it.

“It wasn’t dangerous, I probably just should have given up quicker,” he explained to Speedcafe.com.

“I kept trying to push and kept going a bit wide at the hairpin.

“I was still trying to salvage a good result where I should have just realised and got it to the end a bit earlier. I didn’t realise the problem would keep getting worse.”

Dutton confirmed that a failure pertaining to the brake bias balance bar was the cause of the issue, which also saw bias wind itself to the rear.

However, he said that the team would need to undertake a more thorough inspection back at its Banyo workshop to ascertain the exact problem.

“These cars have got two braking circuits so that you can adjust how much the front does (braking) and how much the rear does, for the balance of the car,” he explained.

“Because the driver is braking at the absolute limit, they need to be able to manually adjust that to suit fuel loads, tyre conditions, and car set-up.

“But there’s a range that it works in; the problem is, we don’t know if it’s wound itself to the end of the stops, or the sensor has failed, or the connection to the sensor.

“It wasn’t reading what it should, so Shane thought it was in the right spot when it wasn’t.

“We don’t know if he kept adjusting it the wrong way because the sensor was reading faultily or if it’s self-adjusted, which can happen if cables break or things like that.

“We need to understand that – we won’t until we get home – but basically, if it goes all the way one way, to stop the brakes from failing and being unsafe there’s a stop.

“When you’re trying to go fast, it’s not by the bye and it’s a big deal.

“That’s the mechanism which has failed. It has to be free enough to adjust so that if that cable then breaks, the problem with it being nice and free for the driver to adjust it easily means that it will self-adjust and the screw will wind itself with the vibration from the car.”

Van Gisbergen, meanwhile, was disappointed with the result but confident he will bounce back.

“At this stage it’s just orange numbers on the car, but not anymore,” he said in reference to the colour of number which denotes the championship leader.

“Obviously we would have liked to have still got good points, which we managed to do at a bad weekend in Melbourne.

“It’s a shame but we’re going to some tracks that I like; we’ll be fine.”