Paul Dumbrell stayed clear of the chaos behind him to beat Chris Pither to victory in Race 3 of the Dunlop Super2 Series at Symmons Plains.

The two previous race winners this weekend ran nose-to-tail all race, including a willing exchange in the early laps, as drama unfolded before and after the race started.

Jack Smith escaped further damage when his #21 Brad Jones Racing VF Commodore was turned around ahead of the bulk of the field after contact with Garry Jacobson at Turn 2.

Both retreated to the pit lane, as did Jacobson in his wounded #26 MW Motorsport Nissan Altima, while the incident went under investigation by officials.

Racing continued and the top three broke away until Pither leaned on the rear end of Dumbrell’s Commodore as he tried to pass at the end of the back straight on Lap 6.

That bottled up the first five cars for the next half a lap and Pither cranked sideways as Brodie Kostecki got into his door at Turn 3.

Jones snatched third on the outside when they all checked up at the hairpin, while Alex Rullo (#62 MW Motorsport Nissan Altima) also latched on to the train.

Rullo in fact found a way past Brodie Kostecki a lap later, only to be nudged off the road at Turn 6.

The Safety Car was called on Lap 11 after Dom Storey locked the brakes and beached his #63 Eggleston Motorsport VF Commodore at the hairpin.

The restart on Lap 14 was clean, save for Rullo going deep at the hairpin but managing to hold position.

He pressured Brown for several laps and eventually passed at the end of the back straight on Lap 21.

At the front, Pither continued to go with Dumbrell and while he could not fashion a move he did win the round.

“100 percent turnaround from Adelaide (Round 1) to be honest,” said Pither.

“It’s great to go away from a round where you’re not quite there and make some changes and have them pay off.

“The First Security Holden was fast out the gate on Friday and we had to just fine tune it from there.

“Full credit to the team, GRM, they’ve done an awesome job and fantastic result. (It is) Round 2, we can only build on this.”

Jones finished third in a race shortened to 25 laps due to time certainty, while a five-second penalty for Brodie Kostecki’s touch with Rullo put him back from fourth to sixth.

Jack Smith finished 12th having been 20th after Lap 1, Bryce Fullwood (#16 Matt Stone Racing FGX Falcon) was 15th, and Jacobson did not reappear. 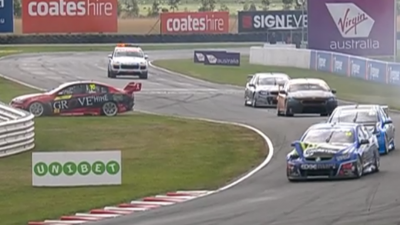 Dumbrell’s series lead has grown as Pither swapped positions with Jacobson to be second and seventh respectively in the standings.

Round 3 of the series supports the Perth SuperSprint on May 4-6.