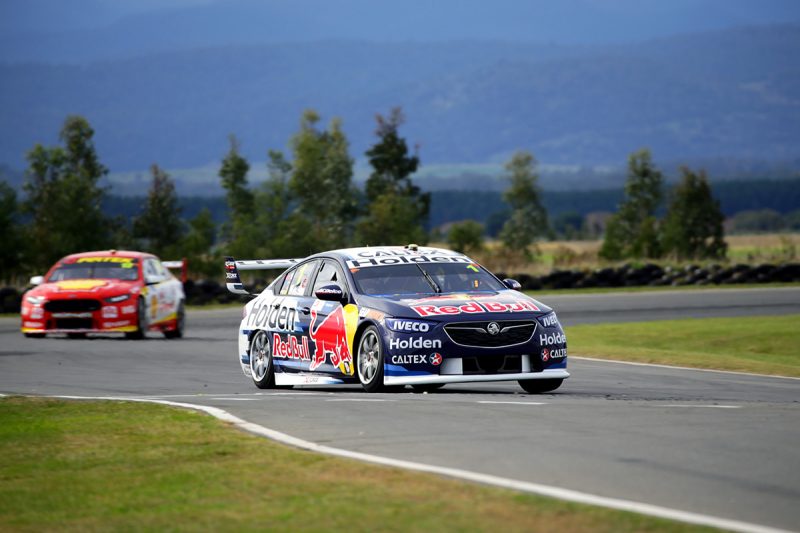 Jamie Whincup does not see Holden’s sweep of the top three in Friday practice at Symmons Plains as necessarily a precursor of a dominant weekend for the marque.

Whincup, however, maintained that taking a new car in the ZB Commodore to a circuit which is quite different to the first two raced on this season is a source of uncertainty ahead of the weekend.

“I wouldn’t say Holden domination,” he responded when asked if the Friday form line pointed to a another strong showing for the Lion.

“To be honest, we’re a little bit nervous of the new body shell and how it will perform at a circuit like this.

“I think early indicators are that it’s every bit as good as last year’s car. They’re positive signs at least before qualifying.”

The seven-time champion’s comments are arguably in line with the tight margins in both sessions, with the first 14 of 26 cars split by only 0.4001s in Practice 1.

The second session was even more close-run with the top four within a tenth of a second and the top eight going under the practice record set only last year.

Scott McLaughlin, in a DJR Team Penske Falcon, was the other member of that top four while his team-mate Fabian Coulthard and fellow Ford driver Mark Winterbottom (Tickford Racing) were also in the mix.

Simona de Silvestro led the Nissans in 11th, a little over 0.3s off the pace.

Whincup pointed to favourable weather conditions as the reason for the frantic Friday pace, which came despite a move away from the more aggressively constructed tyres that were used in 2017.

“It’s all about the wind,” he explained.

“The wind (on Friday) was great; you get a little bit protected heading up to the hairpin, and as you turn the hairpin you get that big tailwind and it just rips you down the back straight.

“You look at your predicted time and you’re just making time sitting there on full throttle.

“The wind was what (Friday)’s times were all about. If it changes (today) we’ll go slower.”

Supercars are next on track for Practice 3, a 20-minute hit-out which does not affect the qualifying order, at 1105 local time/AEST.