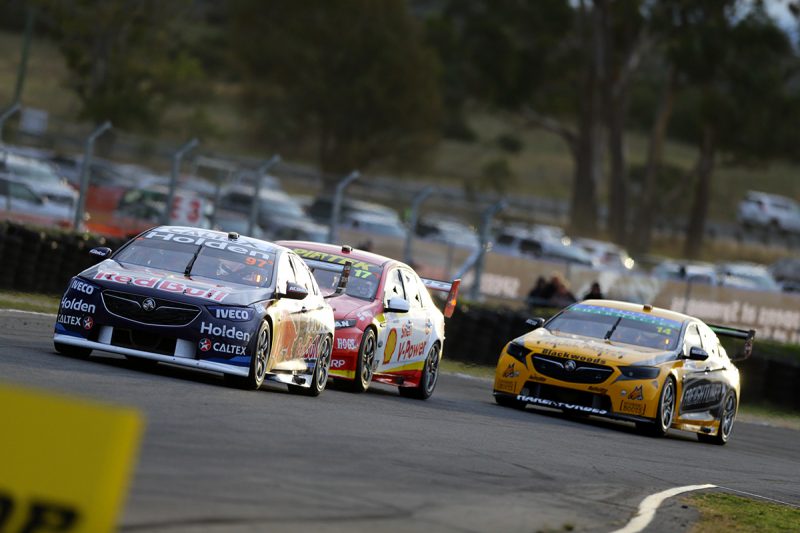 Van Gisbergen was the first driver to make his compulsory pit stop in Race 7 of the Virgin Australia Supercars Championship, handing over the lead of the motor race to Red Bull stable-mate Jamie Whincup at the end of Lap 5.

Car #1 and Craig Lowndes in #888 still preceded the bulk of the field in peeling off when they both took service six laps later, emerging ahead of van Gisbergen when re-entering the circuit.

Whincup had gained with some fast laps as van Gisbergen settled back into the race amid a squabble with Scott McLaughlin, but Car #97 lacked pace over the race distance.

Van Gisbergen had immediately passed Lowndes to place himself effectively second but faded to sixth by the end of the 50-lap encounter as his tyres started to wear.

“We didn’t maximise obviously on Car #97; stopped that a bit early, so we got it wrong with the tyre deg,” team manager Mark Dutton told Speedcafe.com.

“We still fought really hard and well to only get relegated to sixth and there were people that had much worse tyre life than us so the tyre life itself didn’t seem too bad relative to others, but the degradation caught us a little bit off-guard.”

Walkinshaw Andretti United’s James Courtney joined Whincup and Lowndes on the podium while Scott Pye nearly ended up threatening van Gisbergen at the end as he recovered from clutch problem which delayed Car #2 in the pits.

Courtney pitted on Lap 17 and therefore had a 33-lap second stint, while Pye’s race broke into 22 plus 28 laps.

Sunday’s race is 84 laps with two compulsory pit stops, making for stints of 28 laps each under a strict ‘even tyre’ strategy compared to 25 on the Saturday.

Dutton agreed that WAU’s showing suggested that a longer first stint may prove the faster strategy in Sunday’s second race.

“They showed what we thought about the tyre deg being higher during the race, that the stopping late paid bigger dividends than it usually would here,” he said.

However, he cautioned that the preferred lap to pit is a moving target influenced by the speed of competitors.

“It’s hard to tell, you do just have to adjust on the fly,” he explained.

“The magic lap is going as late as you can, dividing the race at least in two if you can, or three tomorrow, but there’s never a fixed magic lap.

“We could have stopped (Whincup) earlier but then you saw that he was doing quicker laps and the people who’d stopped (earlier) with fresher tyres still weren’t going quicker than him so you leave him out and you keep going.

“It is all relative; you’ve just got to keep your eye on the whole field as best you can and then make your call then.

Van Gisbergen had Tim Slade, McLaughlin, and Jack Le Brocq queuing up behind him towards the end of the race and agreed that he had been pitted too early.

“The race started alright and we had a good lead but we pitted early to keep the lead and that was probably a little aggressive,” van Gisbergen said.

“We were then pushing hard on those first few laps which really hurt the tyre.

“That just made it a long 45 laps home and we just ran out of tyres.

“We need to make the set-up better and I think we were a little too aggressive – we thought other drivers would run longer than they did and they were quicker at the end and just attacked us then.

“We probably should’ve been a little bit more conservative.”

Sunday for the Supercars Championship begins with practice at 0955 local time/AEST, which will set the order for a repeat of the new three-part Armor All Qualifying format.