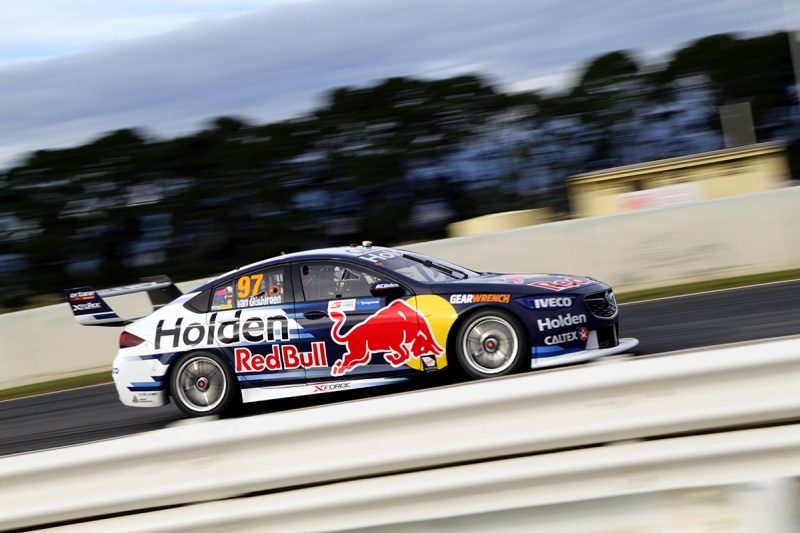 Shane van Gisbergen and Jamie Whincup will share the front row for Race 7 of the Supercars Championship at Symmons Plains as Chaz Mostert was caught out by the new qualifying format.

The Triple Eight ZB Commodore drivers both came out and laid down 50.6s at the start of the third and final part of Armor All Qualifying.

While they could not better their respective efforts in the rest of the 10-minute stanza, nor could anyone else despite Scott McLaughlin’s late effort.

“Thankfully we had a good car and didn’t have to spend too many tyres to get through to the next session,” said van Gisbergen, who moves to three Armor All Pole Positions for the year to date.

“It was pretty good, and it worked; there was not much traffic out there, everyone got a fair shot at it, so well done to Supercars, they’ve done a good job.”

McLaughlin went fastest to the first sector on his last flying lap, with new tyres only on the working side of his Shell V-Power FGX Falcon, but ultimately could not improve and will line up third on the grid.

Craig Lowndes, who was fastest in Part 2 of qualifying with a time quicker than that which put Whincup on the front row, opted to only make one run in Part 3.

He initially put the Autobarn Commodore fifth and then improved marginally to qualify fourth for the opening race of weekend.

“Obviously, it’s a circuit that really suits my style; late braking, get it in, get it out.

“We all talk about that hairpin – Turn 4, it’s so difficult to get into it. Its like a NASCAR bowl, you’ve got to get out and get that big slingshot.

“We’ve got good straight line (speed) and handling, it’s just a matter of getting the thing stopped and turned.”

They were split by David Reynolds (Erebus Motorsport), with the top 10 rounded out by rookie Jack Le Brocq (Tekno Autosports) and Garth Tander (Garry Rogers Motorsport).

The latter two had both come all the way from Part 1 of qualifying, which Le Brocq topped.

Fabian Coulthard (Shell V-Power Racing) heads the list of those who did not make the final 10 minutes of qualifying, while Tickford Racing’s best were Cameron Waters in 13th and Mark Winterbottom in 15th.

They were separated by the leading Nissan of Rick Kelly in 14th.

Mostert, who finished the session with new tyres just on the rear of the Supercheap Auto Falcon, fell just 0.0127s short of making it out of Part 1 of Armor All Qualifying and will therefore take up 17th position on the starting grid this afternoon.

Most of the 16-car field which were first on-track started on new tyres in a bid to ensure that they were among the top six that moved on to Part 2.

Simona de Silvestro (Nissan Motorsport) ended up being hurt significantly by missing the top 10 in Friday practice when she ended up 15th in Part 1 and therefore 25th on the grid.

Race 7 of the Virgin Australia Supercars Championship, the first race of the Tyrepower Tasmania SuperSprint, takes place over 50 laps from 1645 local time/AEST.

Results: Armor All Qualifying for Race 7

* In respective last part of qualifying