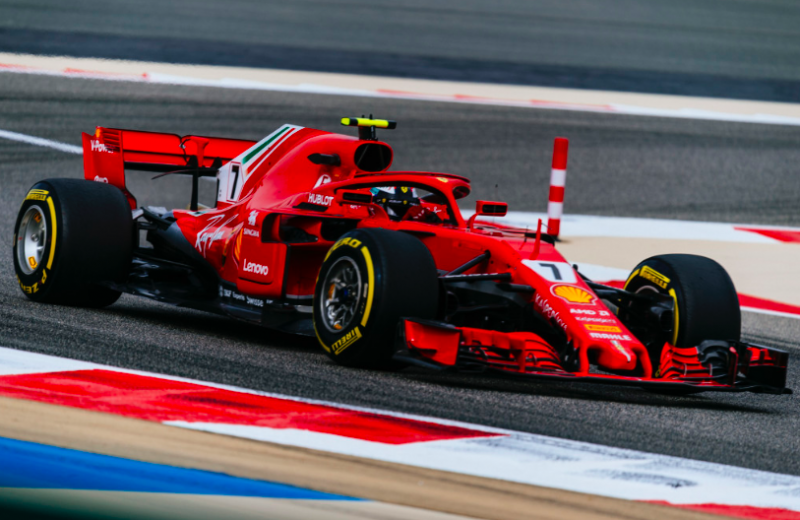 Kimi Raikkonen emerged fastest in Friday practice for the Bahrain Grand Prix despite ending Practice 2 on the sidelines.

The Ferrari driver posted a 1:29.817s effort after becoming the first to fit super soft rubber in the second 90 minute practice outing.

Raikkonen’s lap came amid a qualifying simulation before he and the majority of the field conducted race runs.

However, his session came to an abrupt halt with 14 minutes remaining when he pulled off the track with a loose front right having just visited the pits for soft compound tyres.

The incident will be investigated by the stewards who elected to issue the squad with a €5,000 fine.

Valtteri Bottas was third for Mercedes albeit half a second adrift of Raikkonen while reigning world champion Lewis Hamilton was fourth.

The Brit was on course to set a faster time but was baulked by Haas F1’s Kevin Magnussen.

Max Verstappen was the quickest of the Red Bull drivers in fifth although his day had been hampered by a loss of power that necessitated an engine manifold change in Practice 1.

Meanwhile, Daniel Ricciardo was sixth in the sister RB14 having topped the opening 90 minute session.

The Australian was almost a second slower than pacesetter Raikkonen.

The pair evaluated upgrades which were initially expected to arrive in time for the season opening Australian Grand Prix.

New Zealand’s Brendon Hartley propped up the field in 20th position after completing 38 laps in the Toro Rosso.

Practice 3 is scheduled for 2200 (AEST) on Saturday with qualifying due to start at 0100 (AEST) on Sunday morning.