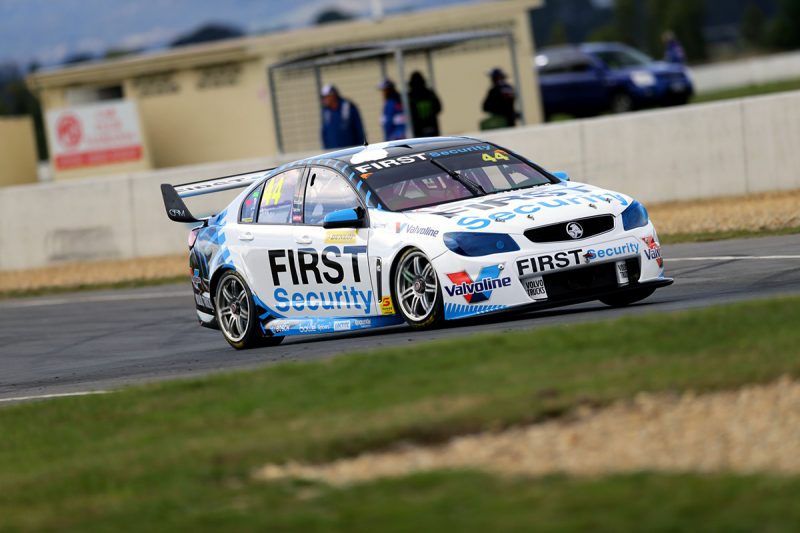 Chris Pither has taken Armor All pole position for both Races 1 and 2 of Round 2 of the Dunlop Super2 Series at Symmons Plains.

Pither left it until late in both 10-minute sessions to bump an Eggleston Motorsport driver, namely Paul Dumbrell in Armor All Qualifying for Race 1 and Will Brown for Race 2.

Dumbrell and Brown experienced contrasting sessions, the former qualifying 10th on the grid for Race 2 and the latter 15th for Race 1.

Armor All Qualifying for Race 1

Pither set the pace in the first run as most of the field chose to start the first qualifying session on the tyres they used in Practice 2 the day prior.

Dumbrell (#88 VF Commodore) was only seventh after his opening salvos but jumped to first position when he took on green tyres.

He remained there as the chequered flag came out before Pither moved back into the lead with a 0:52.2231s, just under a tenth faster in the #44 Garry Rogers Motorsport VF Commodore.

Brodie Kostecki (#57 Kostecki Brothers VF Commodore) and Jack Smith (#21 Brad Jones Racing VF Commodore) both impressed as they made the second row of the starting grid.

Round 1 pole-sitter Garry Jacobson (#26 MW Motorsport Nissan Altima) lifted himself from 19th after the first run to sixth on the grid, alongside Shae Davies (#67 Paul Morris Motorsport FGX Falcon).

The top 10 was rounded out by Kurt Kostecki, Adam Marjoram, Nathan Morcom, and Dean Fiore.

In a messy session all-round, Brown (#38 VF Commodore) was not sanctioned after passing two cars which had slowed for a yellow flag at the hairpin.

Jordan Boys had been sitting on the apron on the outside of the corner, with the yellows catching out a number of drivers who came up fast on other cars.

Alex Rullo, who ultimately finished the session 14th, was another that had a close call when he just avoided slowing team-mate Jacobson.

Armor All Qualifying for Race 2

Brown went provisionally to what would have been his first Super2 pole halfway through the hit-out, going ever so slightly faster than Pither’s earlier benchmark.

The Kiwi didn’t leave his run as late as before, but was still the last to make a serious impact when he laid down a 0:52.1159s in the final minute after Brown had already stepped out of his car.

Brodie Kostecki was third-fastest for the second session in a row while Macauley Jones (#14 Brad Jones Racing VF Commodore), who had experienced a relatively poor start to the weekend, got back up towards the front of the field in fourth position.

Jacobson and Smith line up off Row 3, ahead of Rullo, Kurt Kostecki, and rookie Zane Goddard.

Dumbrell sat out the first five minutes and only attempted one run on his way to 10th.

The first of three 30-lap races is due this afternoon at 1530 local time/AEST, with points from Races 1 and 2 setting the grid for Race 3 tomorrow afternoon.