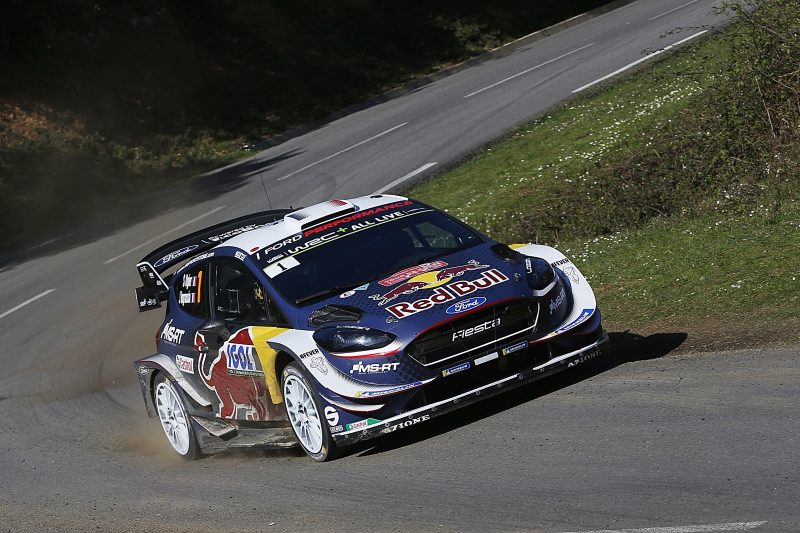 Sebastien Ogier has a commanding lead having won three out of the four stages on the first day of competitive running in the Tour de Corse.

The M-Sport Ford driver holds a 33.6s lead over Thierry Neuville while Sebastien Loeb crashed his Citroen into a ditch.

Ogier topped both La Porta – Valle di Rostino stages and the first pass of the Piedigriggio – Pont de Castirla stage in between despite battling an ill-handling Fiesta, and was only 1.8s off the pace on Special Stage 4.

“We pushed hard all day, it’s a great start,” said the Frenchman.

“I was surprised with my time in the first stage as it wasn’t perfect. I had the same kind of oversteer I had in the first round in Monte-Carlo.”

Neuville is his nearest challenger despite his Hyundai suffering brake problems in the morning, with Kris Meeke 5.1s further adrift in a Citroen.

In the other Citroen, Loeb was second-fastest through the first stage before sliding into a ditch and not being able to get out in SS2.

“I turned into a right-hand corner and on the exit, I had to brake for a tighter left-hand bend,” recounted Loeb, who will resume the rally on the Saturday.

“I was a caught out a little bit by the amount of gravel and mud on the road, and as a result I understeered and just couldn’t quite make the left-hander.

“As I went off, I tried to avoid hitting a tree straight on but I ended up sliding into a ditch.

“It’s very frustrating because we had made a good start on the opening stage. We’ll now try put on a show for the fans.”

The Toyotas of Ott Tanak and Esapekka Lappi, the latter of whom won SS4, are fourth and fifth respectively.

Jan Kopecky (Skoda) is the WRC 2 leader in 11th outright.

Saturday action in Round 4 of the FIA World Rally Championship comprises two loops of three stages each totalling 136.90km, from around 1530 AEST.