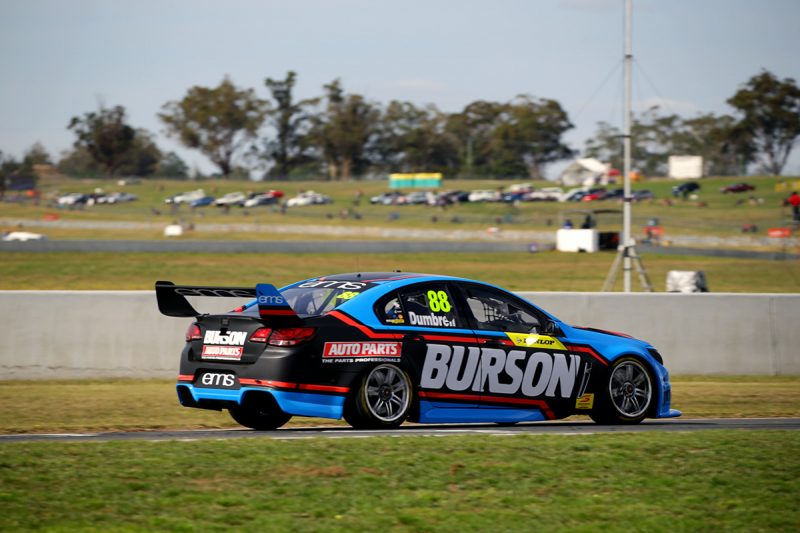 Paul Dumbrell has taken an all-the-way win in an incident-littered Race 1 of Round 2 of the Dunlop Super2 Series at Symmons Plains.

Dumbrell made the best start from the front row and drove on to a fairly comfortable victory despite a mid-race Safety Car, while pole-sitter Chris Pither recovered one of the two positions he lost when the lights went out to finish second.

Series contender Garry Jacobson finished 21st after being taken out by Shae Davies before the latter spectacularly spun off the back straight in a second incident.

The trio exchanged fastest laps in the early stages before Dumbrell began to build a gap in the #88 Eggleston Motorsport VF Commodore.

Behind, Kurt Kostecki (#55 Kostecki Brothers VF Commodore) passed Jacobson to move into fifth position, behind cousin and team-mate Brodie Kostecki (#57 VF Commodore), as they ran up the back straight on Lap 3.

Worse was to come for Jacobson on Lap 6 when Davies locked up at the hairpin and hit the rear end of the #26 MW Motorsport Nissan Altima, causing the 2016 series winner steering damage.

Almost as soon as he got around the corner, Davies had a coming-together with Adam Marjoram (#15 Image Racing VF Commodore).

The contact sent the #67 Paul Morris Motorsport FGX Falcon spinning into the ditch and even swiping the fence which guards the marshal’s post located on the outside of Turn 3.

Davies drove back to pit lane and immediately to the paddock, before a similar error for Jake Kostecki ultimately triggered a Safety Car on Lap 11.

Jake Kostecki had suffered an even bigger lock-up and slammed into the side of Tyler Greenbury (#13 Matt Stone Racing VF Commodore) at the hairpin, proceeding little further before pulling on the side of the back straight in the #56 Kostecki Brothers VF Commodore.

Dumbrell took a slightly defensive approach at the Lap 17 restart but gradually eased away until taking the chequered flag in a time-certain finish after 24 laps.

Pither finished second while third for Smith was in fact his first top 10 in Super2.

Kurt Kostecki held out Brodie Kostecki to remain fourth, while Macauley Jones (#14 Brad Jones Racing VF Commodore) drove from 11th on the grid to sixth, having passed Dean Fiore on the penultimate lap.

Fiore crossed the line in seventh but was issued a five-second penalty for a driving infringement, having twice driven his #23 MW Motorsport Nissan Altima into the side of Marjoram.

He appeared to redress the first contact, which occurred at the hairpin, by fanning the throttle entering the back straight only to give Marjoram a nudge at the other end.

Dominic Storey (#63 Eggleston Motorsport VF Commodore) was last of those on the lead lap in 20th after he was spat out into the outfield exiting the hairpin on Lap 1, having tangled with Jake Kostecki.

Race 2 of three starts tomorrow at 0910 local time/AEST when Pither will again be on pole.