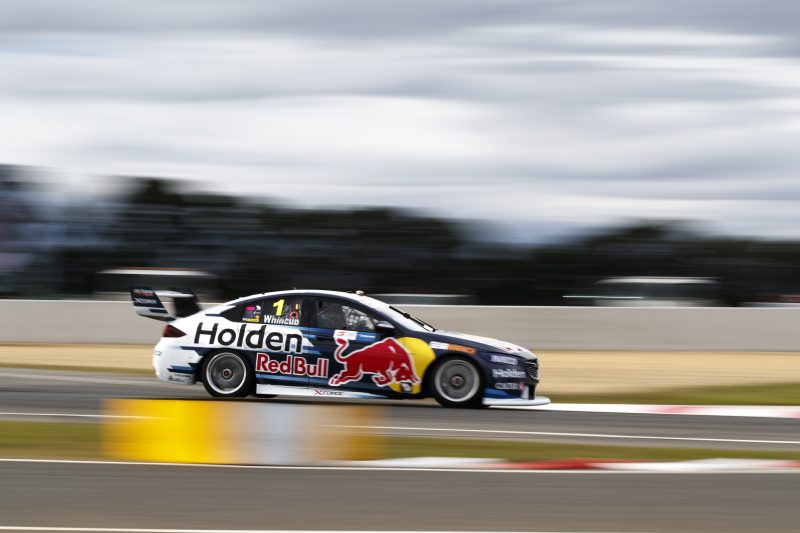 A late red flag set up a 10-minute showdown, during which Whincup banked a 50.5609s lap to edge out David Reynolds in a session that came alive in the final minutes.

Scott McLaughlin had been fastest, but the DJR Team Penske driver fell to fourth by the flag, unable to improve on his earlier effort.

Craig Lowndes was third fastest, backing up his solid pace from the opening session of the weekend, while van Gisbergen ensured all three Triple Eight cars were in the top five.

An incident between Chaz Mostert and James Courtney saw the pair make contact on approach to the hairpin.

The confrontation appeared to start half a lap earlier, when Courtney caught the Supercheap Auto Falcon towards the end of the lap.

On the approach to the hairpin Mostert appeared to let Courtney through, only for the Walkinshaw Andretti United driver to also slow.

Mostert made contact with the rear of the Commodore as a result, though both carried on.

At the flag, Mostert was capable of only the 20th best time for the session, and will make an appearance in Qualifying 1 tomorrow.

An off from Simona de Silvestro at the hairpin which saw the Nissan Altima drive slide into the gravel trap.

Bunkered there she was towed clear before returning to the pits and the session restarting.

However she recovered well to set a time briefly good enough for the top 10, falling to 11th and leaving her the fastest Nissan running.

A red flag, with 10 minutes left in the 45-minute session, was shown when Nick Percat also spun at the hairpin.

With the clock stopped, and the session contributing to the starting order for qualifying tomorrow, it set up a busy final part of the session.

It saw both Red Bull cars head out on a fresh set of tyres, Whincup and Lowndes quickly usurping DJR Team Penske from the top of the time sheets with Reynolds also finding his way to the top end of proceedings.

The late surge saw Pye and Courtney shuffled down the order, while de Silvestro briefly made an appearance inside the top 10 for the session.

The 26-car field was covered by just 0.87s, the top eight under the existing lap record.

Supercars are next on track for a 20-minute practice session, which has no formal bearing on qualifying, tomorrow at 1105 local time/AEST.