Van Gisbergen on record pace in Practice 1 at Tassie 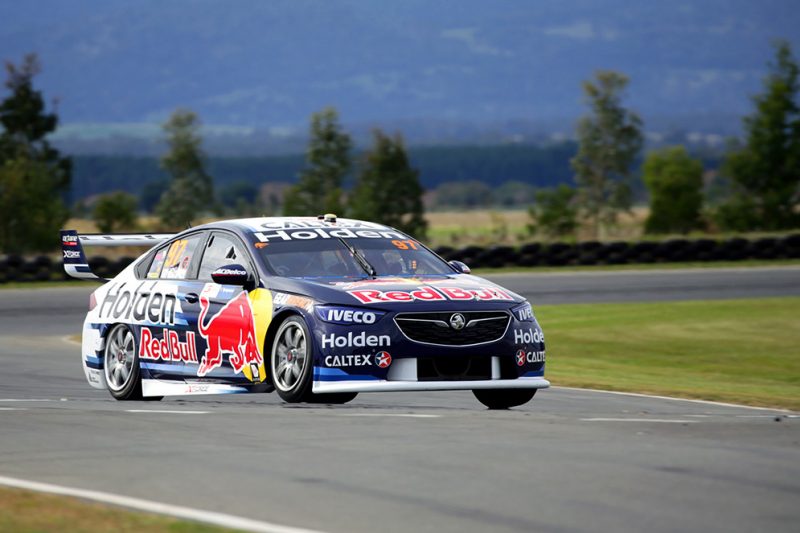 Shane van Gisbergen has set the fastest Supercars time ever recorded around Symmons Plains in the opening Practice session for this weekend’s Tyrepower Tasmania SuperSprint.

Triple Eight headed the early running, with Craig Lowndes setting the pace before Shane van Gisbergen and Jamie Whincup enjoyed spells at the top of the timing screens.

The trio remained close to the pointy end throughout, Lowndes setting the fastest lap in the back end of the session to underline his early pace.

The final stanza of the session was run off at a far higher tempo than usual, with teams beginning to think ahead to qualifying to cover off the chance of Practice 2 producing slower times.

It saw van Gisbergen set the fastest ever Supercars lap around Symmons Plains, banking a 50.7894s lap inside the final minute of the session using a set of green tyres.

“It’s amazing, we were faster than last year on a slower tyre, it’s meant to be,” van Gisbergen said.

“I guess in practice now, the game has really changed. You have to put down a good marker, normally we’d save a bit, but you’ve got to put down a marker to make sure you’re in the top 10 (for qualifying) and don’t use a set that you don’t need to.

“We put a good banker down, you never know what will happen in Practice 2 with weather or red flags, so, got a good marker, got a good car so that’s a good way to start.”

It proved a positive session for the team, with James Courtney second fastest for a time before ending the session sixth, and Pye topping the standings for a time with a 50.8534s.

Having propped up the bottom of the timing screens in the early minutes, Fabian Coulthard jumped into the top 10 in a field that saw the top 25 runners covered by 1.2s after the opening 10 minutes.

The DJR Team Penske driver initially struggled with oversteer before heading out inside the final 10 minutes of the session to be the first to dip below the 51-second marker on his second consecutive flying lap.

The outlier was Simona de Silvestro, who suffered an electrical issue which left the Swiss driver stranded at pit entry.

Nissan Motorsport mechanics were forced to push the stricken Altima up pit lane before swapping out the car’s ECU in the first half of the session.

Nick Percat found himself off the road after locking a brake going into the penultimate corner before the BJR driver dived into pit lane with a just under 30 minutes remaining in the 45-minute session.

Teams have an additional set of tyres available for practice, with few opting to run the green Dunlop rubber in the opening session leaving the prospect of faster times in the afternoon’s session.

Mark Winterbottom was the leading Tickford Racing entry, seventh overall for the session, though complained of a poor handling car despite his comparative pace.

Outside of the top ten was David Reynolds, who was 0.4s off the time set by van Gisbergen.

Chaz Mostert was also down the order in 16th, with the entire field covered by little more than a second.

A second Practice session is scheduled for 1500 Friday afternoon, the times from which combined with those of Practice 1 will determine the 10 drivers who progress straight to Qualifying 2 tomorrow.